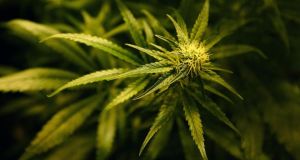 Maastricht was chosen to test the ban on “drugs tourists” from May 1st last year because its location on the borders with Germany and France means it attracts some 1.6 million visitors to its 13 city centre coffee shops every year. Photograph: Gareth Fuller/PA Wire

Plans to ban foreigners from buying and consuming cannabis in the Netherlands’ famous “coffee shops” are in doubt this weekend after the test implementation of the ban in the southern city of Maastricht degenerated into chaos.

Maastricht was chosen to test the ban on “drugs tourists” from May 1st last year because its location on the borders with Germany and France means it attracts some 1.6 million visitors to its 13 city centre coffee shops every year – an influx the authorities say causes rowdiness and disruption.

The first blow to the proposed nationwide clampdown came last November when Amsterdam, whose 220 cannabis cafes are a major source of tax revenue, said it would ignore both the ban on foreigners and a new demand that even Dutch users should register for a wietpas or “weed pass”.


Active ingredient limit
Amsterdam’s city council said, however, that customers would have to present evidence of age, and that it would go ahead with a plan to place a maximum limit on the level of THC, the active ingredient in cannabis, in the drugs on sale.

In Maastricht though there was no easing of the new rules and the implementation of the local ban had become a test of strength between Maastricht Coffee Shops’ Association and the city’s tough-talking mayor, Onno Hoes (52), a local stalwart of prime minister Mark Rutte’s Liberal Party.

Among the first premises to be raided by Maastricht police and then prosecuted for serving foreigners was the longestablished and appropriately named Easy Going cafe, owned and run for the past 23 years by Coffee Shops’ Association spokesman Marc Josemans.

That, in retrospect, is where it all went wrong for city hall. Instead of becoming a landmark conviction, the case against Josemans was thrown out a fortnight ago because the judges said the mayor had failed to establish in legal terms why foreigners should not be served.

Within days, Maastricht Coffee Shops’ Association said it would ignore the ban and throw open its doors to everyone on the basis of the court ruling.

Pledging to appeal the court’s decision, the mayor ordered a zero-tolerance approach by the police, who have carried out a fresh series of raids during the past week. In checks on two coffee shops on Thursday, 13 foreigners were found in one and 17 in another. There were four arrests.

So damaging has the Maastricht confrontation become that other cities apart from Amsterdam are now beginning to feel a blanket ban may be more trouble than it’s worth.

Even in Maastricht, there are now tentative face-saving suggestions from city hall that the coffee shops may be allowed to remain open after all – if they move out of the city centre.