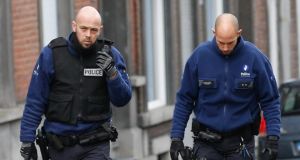 Belgian police patrol in Verviers Eastern Belgium on Friday, the day after an anti-terrorist operation. Two people died and one was injured in a police anti-terrorism operation in the city against a suspected jihadist cell. Photograph: EPA 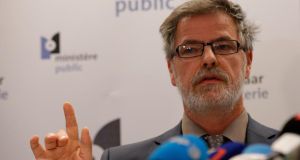 Belgian, French and German police interrogated dozens of Islamist suspects on Friday as much of Europe remained on heightened security alert after last week‘s killings in Paris and raids in Belgium in which two gunmen were killed.

In Paris there was a fresh scare when a gunman took several people hostage at a post office in a northwestern suburb. A siege ended when he gave himself up to police. No one was hurt. Authorities said they could not confirm whether the incident was related to terrorism.

Belgian police questioned 13 suspects and France held two people on Belgium‘s request, a day after two gunmen were killed during raids against an Islamist group that authorities said were planning to attack police.

French police said they had arrested 12 people suspected of helping the Islamist gunmen behind attacks last week on a satirical magazine and kosher supermarket in Paris.

Officials said there was no clear link between the suspected Belgian plot and the Paris attacks a week earlier, but described them as part of a common threat.

In Germany, police arrested two people following a raid on 12 homes and a mosque. A police spokesman claimed the suspects were probably part of an extremist cell that recruited fighters for Syria.

In Belgium, police uniforms, explosives and guns including four AK-47 assault rifles were found in the apartment where the two gunmen were killed on Thursday in the raid in the eastern town of Verviers. Their identities have not been released.

“This group was on the point of carrying out terrorist attacks aiming to kill police officers in the streets and in police stations,” prosecutors‘ spokesman Eric Van Der Sypt said.

He declined to comment on media reports that the plotters planned to behead a policeman.

In France, demand for the first post-attack edition of the weekly Charlie Hebdo remained high for the third day in a row. One kiosk in central Paris reported a thief broke in overnight and stole all its copies.

However there were violent protests in some Muslim countries against the weekly for putting a caricature of a weeping Prophet Muhammad on the cover of the new edition.

At least four people were killed when a march in Niger against the Charlie Hebdo cartoons turned violent, two police sources said.

“There was one police officer killed and three civilians,” said a police source. “Some of the protesters were armed with bows and arrows as well as clubs. The clashes were very violent in some places,“ he said.

About 200 Pakistani protesters clashed with police outside the French consulate in Karachi after a demonstration against the magazine.

French interior minister Bernard Cazeneuve said a total 12 suspects had been detained so far in connection with last week‘s Paris attacks, most of them known to police for common crimes. Judicial sources said the eight men and four women were detained in the greater Paris area.

Nerves remained on edge. Paris’s Gare de l‘Est train station was evacuated for about an hour during the morning rush.

Belgian security forces were on high alert, with extra armed security in evidence at some public buildings, notably police stations. Public broadcaster RTBF said officers were told not to be on the streets alone while in uniform. Some Jewish schools in Belgium and the Netherlands were closed.

US secretary of state John Kerry was in Paris to convey US condolences to the nation and to lay wreaths to the victims at the two main sites of the attacks.

Mr Kerry greeted president Francois Hollande with a firm embrace at the Elysee presidential palace. Washington has said it regretted a decision not to send senior US officials to a commemoration march in Paris on Sunday attended by dozens of world leaders.

“Today, I wanted to be here, at home with you, among you,” Mr Kerry, speaking fluent, American-accented French, told an event. “I wanted to tell you personally of the horror and revulsion that all Americans felt at these cowardly and despicable attacks against innocent victims and fundamental values.”

“France has come out of this ordeal with its determination intact to act on the international scene,” Mr Hollande told an annual gathering of about 200 foreign and French ambassadors.

Belgian investigators were also examining if a man detained in the city of Charleroi on suspicion of arms trafficking had any links with Amedy Coulibaly, the gunman who killed four Jews at a kosher supermarket in Paris last week. The detained man’s lawyer told French media he had merely sold Coulibaly a car.