Discord among states over refugees gives way to panic 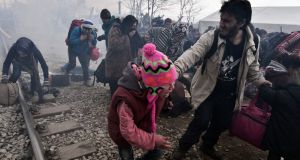 The images of desperate people being sprayed with teargas, which flashed across TV screens this week, are scenes many Europeans thought they would never see.

On Monday, Macedonian police fired teargas at people who were trying to enter the country from Greece. The intervention took place after a group of migrants broke down a gate at the border using a metal pole at the Greek-Macedonian border town of Idomeni, where about 8,500 refugees have gathered.

On the other side of Europe, French authorities used teargas as they began demolishing sections of the Calais “Jungle”, a move that has already prompted Belgium to impose border controls amid fears that some of the residents could move towards Belgian port towns such as Ostend and Zeebrugge.

The news that at least eight Kurdish refugees had been discovered in Ireland in a lorry that had recently travelled from Cherbourg to Rosslare by ferry may be a wake-up call for Ireland, which has, to date, been sheltered from the full reality of the migration crisis unfolding on the Continent.

The great dream of European Union free movement and border-free travel is in tatters as country after country imposes unilateral action to curb the flow of refugees into their countries. Though the European Commission fires off letters to Belgium, Austria, Greece and other EU countries warning of possible breaches of EU rules, it has so far failed to provide a coherent and sustainable response to the refugee crisis, as its flagship relocation plan lies in disarray.

Disagreement between member states is now giving way to panic.

With summer a few months away, there is a growing sense that the EU’s response to the crisis is entering a critical phase. Next Monday’s EU-Turkey summit is seen by many as one of the final opportunities to gain control of a situation many believe could spiral out of control as frustration threatens to spill over into violence.

That Merkel took a back seat during the British negotiations, leaving other member states and European Council president Donald Tusk to broker a deal for British prime minister David Cameron, was an indication of Germany’s priorities.

While Merkel is keen to demonstrate concrete progress on the refugee crisis ahead of three regional elections in Germany, officials fear it will be difficult to achieve deliverable results by next week.

Stemming the flow of migrants from Turkey remains the EU’s key priority, with Donald Tusk due to meet Turkey’s president Recep Tayyip Erdogan in Ankara today ahead of the summit. With Erdogan, in particular, likely to step up demands for visa-free travel, European member states will need to see concrete evidence that the numbers arriving from Turkey have fallen before giving the final sign-off to the €3 billion deal agreed in November.

Addressing the immediate impasse and looming humanitarian crisis in Greece will be the other focus of discussion. The commission’s promise of new aid to Greece is likely to be accompanied by negotiations on a readmission agreement between Greece and Turkey and a possible resettlement scheme with Turkey.

The pressure to deliver solutions to the refugee crisis is not just being driven by German domestic political concerns. EU officials are aware that failure to get a handle on the refugee crisis could fuel xenophobic sentiment, particularly in eastern Europe.