Some 300 migrants camp in the border strip between Croatia and Slovenia, attempting to find shelter from cold and rain. Video: Reuters 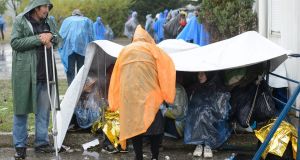 Migrants take cover from the rain as they wait at the Croatian-Slovenian border in Trnovec to cross into Slovenia on Monday. Photograph: AFP 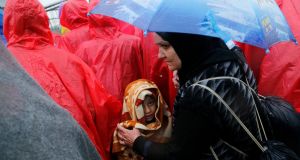 A child looks on as migrants wait in a no man’s land at the border crossing with Slovenia in Trnovec, Croatia, on Monday. Photograph: Reuters 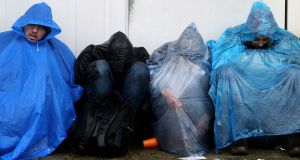 Migrants rest on the ground as they wait to enter Slovenia from Trnovec, Croatia on Monday. Photograph: Reuters 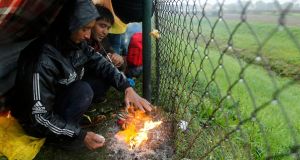 Migrants burn shoes in a bonfire to warm themselves up as they wait at the border with Slovenia in Trnovec, Croatia, on Monday. Photograph: Reuters

Thousands of refugees trying to make their way to western Europe have rushed over Serbia’s border to Croatia after they were stranded for days in dangerous and deteriorating conditions.

The United Nations refugee agency said that between 2,000 and 3,000 people who had been stuck in a virtual no man’s land for days had been allowed to enter Croatia, a move that is likely to put more strain on neighbouring Slovenia, which has already said it can only cope with 2,500 arrivals per day.

The development came as Turkey said it should not be expected to turn itself into a “concentration camp” for refugees even if it boosted its attempts to tighten its borders.

A day after meeting with the German chancellor Angela Merkel, the Turkish prime minister said his country wanted fresh funding from the EU in exchange for curbing the flow of people, but would still not be prepared to house all of those fleeing war and persecution in Syria and elsewhere.

“We can’t accept this idea that ‘we’ve given this to Turkey, and Turkey is satisfied, so all migrants should stay in Turkey’,” Ahmet Davutoglu said in an interview on Turkish TV.

“Nobody should expect Turkey to become a country housing all migrants, like a concentration camp.”

On Sunday, Ms Merkel said Germany was prepared to accelerate the accession process for Turkey’s membership of the EU in exchange for the country’s help in securing European borders and making sure that fewer refugees reach Europe.

Mr Davutoglu’s strident rhetoric - which came less than two weeks before Turks go to the polls in a general election - came as the crisis in the Balkans continued.

Following Hungary’s decision last week to close its southern border with Croatia, thousands of migrants diverted to a different route towards Slovenia.

Earlier on Monday, before the border to Croatia was opened, UNHCR estimated that about 10,000 people were stranded in Serbia, with more on their way.

Aid workers on the ground described increasingly desperate conditions, with little food and few blankets to protect thousands of people, including small children and families, from the elements.

People were unable to sleep on the ground because the mud was knee-high and they were at risk of hypothermia, according to media reports.

Some groups of migrants and refugees had begun fighting one another and were chanting “open the gate, open the gate” to Croatian police, who had built an improved fence to keep people out.

MSF described the scene at the Bapska-Berkasovo crossing point as “extremely chaotic”.

“A few days ago Bapska-Berkasovo was just a transit point, but after the Hungarian authorities decided to close their borders, delays have left thousands stranded with minimum shelter or access to toilets,” said Francisca Silva, MSF’s humanitarian advisor in Serbia.

“People are extremely nervous; tensions are growing between groups of refugees, mothers are crying with their children in their arms, worried that they will lose their chance to cross the border.”

MSF said that about 1,500 people - mostly from Syria and Afghanistan - had spent the night outdoors.

It said that unless adequate protections were quickly put in place, thousands of pregnant women, young children and elderly people would be exposed to potentially life-threatening conditions.

“It’s extremely worrying,” said a UNHCR spokesman. “Again we are a little bit in the situation of a few weeks ago when actions of one country are having a knock-on effect which simply multiplies the misery.”

Officials across the region were angrily pointing fingers at one another on Monday amid the escalating crisis.

Slovenia has accused Croatia of failing to stem the tide of migrants it was sending to the countries’ shared border even though it had promised to do so.

Slovenia’s interior minister, Vesna Gyorkos Znidar, said it was “absolutely unacceptable” that Croatia was sending large numbers of migrants towards the border when Slovenia had said it could only accommodate 2,500 a day.

The interior minister said that the Croatian side is not responding to Slovenian demands to control the flow and is acting only as a transporter.

Slovenia has also accused Austria of limiting the number of migrants it was accepting, although Austria denied the claim.

Croatia said that it did not have the legal authority to force migrants to stay in emergency shelters and accused Slovenia of taking in far fewer migrants than the country initially said it would take.

He added that Croatia would not allow itself to become a “migrant collection centre” for the EU.

Mr Ostojic also criticised Greece for failing to slow an influx of tens of thousands of migrants entering Europe from Turkey.

Nearly 200,000 people have entered Croatia since Hungary closed its border with the country last month.

“The pressure is in several places. Hungary’s actions are now affecting Slovenia, Serbia, and other countries.

“For us it comes back to trying to ensure that countries act in accordance with the obligations under their national and international laws, to ensure that they are managing their borders consistent with asylum obligations,” the UNHCR spokesman said.