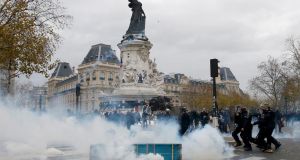 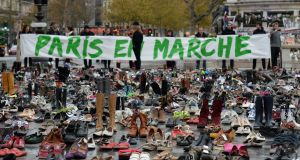 The Place de la Republique is covered in hundreds of pairs of shoes as part of a symbolic and peaceful rally called by the NGO Avaaz “Paris sets off for climate” within the UN conference on climate change COP21. Photograph: AFP/Getty Images 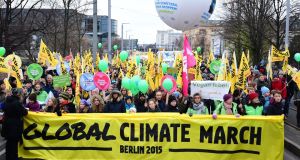 Participants hold a banner reading “Global Climate March” during a rally organised by environmental NGOs in Berlin on the eve of the official opening of a 195-nation UN climate summit in Paris. Photograph: AFP/Getty Images 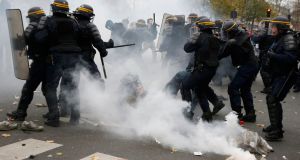 French CRS riot police apprehend a demonstrator during clashes near the Place de la Republique after the cancellation of a planned climate march. Photograph: Eric Gaillard/Reuters

About 100 people have been detained after a major protest in Paris seeking a global climate deal turned violent, Paris’s police chief said.

Michel Cadot told reporters that police had identified about 200 or 300 people who violated a ban on all protests under the country’s state of emergency.

The state of emergency was declared after the recent extremist attacks that resulted in the deaths of 130 people in the French capital.

Mr Cadot said on Sunday about 100 people found to have projectiles or other suspicious objects were detained.

Police fired numerous rounds of tear gas on protesters near the Place de la Republique to disperse them.

The protesters were gathering ahead of critical global warming talks outside Paris.

Earlier about two hundred protesters, some wearing masks, fought with police on a street leading to the Place de la Republique square - a gathering place for Parisians since the terror attacks in the capital on November 13th.

Police fired tear gas at some demonstrators as they tried to reach the square and used tear gas to disperse others.

Demonstrators carried banners calling for the defence of the world’s climate, and democracy.

A march planned for Sunday in the city ahead of the UN climate change summit taking place at Le Bourget outside the capital was banned by police under the state of emergency imposed after the November 13th attacks.

Using the state of emergency rules, police had previously put 24 green activists under house arrest, saying they were suspected of planning violent protests against the summit.

Tens of thousands of people joined one of the biggest global days of climate change activism on Sunday, from Sydney to Berlin, to put pressure on world leaders to unite in fighting global warming at the Paris summit.

Ireland is among 70 countries worldwide where marches were taking place to call for action on climate change, with rallies undertaken in Dublin, Galway, Cork and Belfast.

About 20,000 pairs of shoes were laid out in the Place de la Republique in the French capital, from high-heels to boots, to symbolise absent marchers.

Organisers said the Vatican sent a pair of shoes on behalf of Pope Francis. One activist, dressed in white as an angel with large wings, held a sign saying “coal kills”.

More than 2,000 events were being held in cities including Sydney, Berlin, London, Sao Paulo and New York, making it perhaps the biggest day of climate action in history on the eve of the Paris conference, running from November 30th to December 11th.

In Sydney, about 45,000 people are estimated to have marched through the central business district towards the Opera House.

Among them was Sydney’s lord mayor Clover Moore, who tweeted it was the largest climate march ever held in the harbour city.

Protesters held placards reading: “There is no Planet B,” and “Say no to burning national forests for electricity”.

US president Barack Obama and China’s Xi Jinping will be among more than 140 leaders attending the start of the summit.

In Seoul, hundreds of protesters banged drums and danced.

Activists in France scaled back their plans when the government imposed a state of emergency after the Paris attacks and banned the march in Paris on security grounds.

But activists plan to form a human chain, with about 3,400 people joining arms along what had been the original 3km route through central Paris from the Place de la Republique to Place de la Nation.

“This is a moment for the whole world to join hands,” said Iain Keith, campaign director for Avaaz, one of the organisers.

Alix Mazounie of French Climate Action Network said the activists reckoned a human chain would not violate the state of emergency. “This is not civil disobedience,” she said.

The chain would break, for instance, wherever it crossed a road to avoid disrupting traffic.

Many environmental activists want a phase-out of fossil fuels and a shift to 100 percent renewable energies by 2050.

Some marches were held on Friday and Saturday, from Melbourne to Edinburgh. “Don’t be a fossil fool,” one Australian banner said.

On Saturday, faith groups delivered a series of petitions signed by 1.8 million people urging stronger action, collected on pilgrimages to Paris. “The time for talking is long over,” said Yeb Sano of the Philippines, who walked 1,500 km from Rome.