Conservative Germany is ‘mad as hell’ over Merkel’s policies 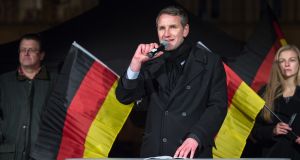 Björn Höcke, head of the far-right wing AfD (Alternative für Deutschland), at a demonstration in Erfurt. AfD is demanding the closure of Germany’s borders to refugees and the expulsion of foreigners with criminal records. Photograph: Jens Schlueter/Getty Images 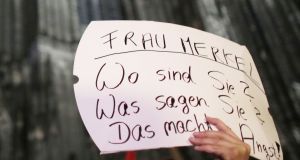 A sign at a demonstration in Cologne on January 5th reading: “Angela Merkel – Where are you? What do you say? It is frightening.” Photograph: Oliver Berg /AFP/Getty Images

The glorious cathedral of Erfurt, in Germany’s east, is shrouded in chilly winter darkness. Then, on cue, the crowd in the pretty market square direct their torches at the centuries-old cathedral walls and drench them in thousands of flickering lights.

Germany’s burgeoning hard-right Alternative für Deutschland party, or AfD, planned this Wednesday gathering weeks ago, just as Erfurt bishops planned to extinguish the cathedral floodlights rather than allow it to serve as a backdrop for what they consider xenophobic politics.

In the end the AfD light show on the cathedral was a protest against the political establishment and what happened two weeks ago around another cathedral, in Cologne, 400km west of here.

There the New Year’s Eve celebrations descended into disaster as gangs of young men, many from Morocco and Tunisia, attacked and robbed, groped and raped women who were out for the night.

After several shocked days of police denials, political paralysis and media uncertainty, the staggering reality of what happened began to seep out like an uncontrollable oil leak: blacker and bleaker with each passing day.

More than 600 criminal complaints have since been filed in Cologne, in a slow-motion disaster that has shattered the credibility of the police and Germany’s political leader Angela Merkel.

Germany accepted 1.1 million asylum seekers last year but, after Cologne, her “we can do this” motivational slogan for open borders last August is starting to sound like her political epitaph.

On the small stage in Erfurt Björn Höcke, AfD state leader and an increasingly controversial figure in German politics, reads the chancellor the riot act in slow sentences filled with elongated, mocking vowels.

“The future of our country depends on whether we manage to stop the suicidal immigration politics of the established parties.”

The 3,000-strong crowd chants, “Traitor!” and “Deport! Deport!” and people wave signs that read “The Terror has Arrived” and “Disastrous Asylum Madness”.

The AfD was founded in 2013 as a conservative-liberal anti-EU bailout party. In the refugee crisis it has morphed into a hard right – critics say xenophobic – law-and- order party to the right of Dr Merkel’s Christian Democratic Union (CDU).

Since Cologne, the CDU-led grand coalition in Berlin has been falling over itself to adopt new measures – including expedited deportation of criminal asylum seekers – that were long-time AfD demands. Sensing the political wind in its sails, the AfD now wants more: mass deportations and national border controls that would end free movement in the Schengen Area of Europe.

“I’m a doctor, I’m 74 and I am seriously worried for my grandchildren’s future; about the compatibility of our values and Islam,” says a local man at the rally who’d rather not be named.

Talking with him for a few minutes opens an emotional sluice. For a century Germany has been blamed for everything in Europe, he says, prompting Germans to try and please everyone. But in the refugee crisis, he says, Germany has succeeded only in alienating its neighbours.

Something has changed in Germany, he says, and politicians have to react. He sounds like a German version of Howard Beale, the newsreader from the movie Network: mad as hell and not going to take it any more.

This doctor is part of a revolt by Germany’s Biedermänner – middle-class conservatives who see themselves as upright citizens but who, for centuries, have been mocked here as buttoned-up bigots.

The Biedermänner are mad at Merkel for taking the CDU to the centre, leaving them politically orphaned. They’re mad at the media for backing her and dismissing their political concerns.

And, after a slow build, these buttoned-down Biedermänner have identified the migration crisis as a channel for their anger, a chance to disrupt Germany’s political system.

And the Cologne attacks have opened a window of opportunity, as Germany slides into a moral and political meltdown.

A decade ago, the World Cup exorcised many old demons and allowed this country to don lighter national robes. But now a bad-tempered, second round of identity shadow boxing has begun for the upper hand.

The fight hinges on the word Gutmensch – do-gooder. It was chosen this week by a German-language academy as its pejorative “non-word” of the year for encapsulating the negative mood in Germany today. The choice was well timed.

For Germany’s centre-right camp, the lesson of Cologne is that the road to migration hell is paved with good intentions – and lined with self-loathing leftie German do-gooders.

Opening German borders has irritated its EU neighbours, undermined public trust in the state and created a security threat with 300,000 undocumented foreign nationals somewhere in the country.

Germany’s centre-left, on the back foot since Cologne, has fought back by accusing the opposite camp of making racist, blanket accusations against Muslims to distract from the key lesson of Cologne: violence against women is unacceptable, regardless of the perpetrator’s origin.

You know things are serious in Germany when, as now, both sides of a big debate like this come out swinging home-made Nazi cudgels.

Right-wingers accuse the lefties of playing down the scale of the crimes, just like their Nazi parents. But conservatives who dared suggest cultural components for Cologne perpetrators’ motivations didn’t get far: left-wingers stopped them asking about the German cultural components of the Holocaust.

Neither side has noticed yet the uniting cultural component of their opposing arguments: their compulsively German need to be absolutely right and their opponent completely wrong.

Ordinary Germans are caught in the middle while the two vulnerable groups who triggered this debate – German women who suffered unspeakable humiliation and Germany’s anxious, authentic asylum seekers – have been degraded to bit players in a proxy war.

“We gave ourselves over to the illusion that you can be a country with open borders, with people you don’t know coming in, including people not intending to follow rules but to take what they can,” says Prof Barbara John, a respected Berlin political scientist and advocate for families of neo-Nazi victims.

“It’s a highly unsettling situation,” says Prof John, “a situation on which politicians have to get a handle. But how?”

If no answers come from the mainstream, warns Prof John, people will seek them elsewhere. And that is the hope of the AfD.

Back in Erfurt, 44-year-old Katja is one of those people. On her way home from the gym, she stumbled on the AfD demo and stopped to listen.

“They’re not wrong in what they say, though I’m not sure their aggressive tone is the best,” says Katja.

She’s not more afraid after Cologne, but knows many who are – and frustrated with the political parties who created this situation.

“That could yet come together,” she says.

With vigilantes roaming the streets of Cologne to protect “blond German women”, and Berlin’s immigration-critical neighbours crowing with Schadenfreude, the clock is ticking in Merkel’s CDU.

MPs warned their leader this week: either your long-promised European solutions to the migration crisis yield results – and soon – or we will force you to adopt national measures.

With three state polls looming in the spring, Cologne is Merkel’s crisis and the AfD’s opportunity.

“The time is ripe for Merkel to disappear from the political stage,” Höcke, AfD leader in Erfurt, says to The Irish Times. “This time, she won’t get the lid back on the pot.”