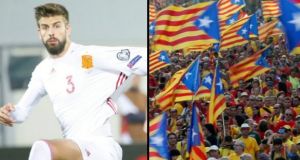 Barcelona’s Gerard Piqué in action for Spain in a recent World Cup qualifier. The player, of Catalan origin, is frequently booed by Spanish fans for his nationalist sympathies. Photograph: Florion Goga/EPA

Last Saturday, the Catalan soccer player Gerard Piqué revealed he will retire from the Spanish national team after the 2018 World Cup.

The surprise announcement followed a bizarre controversy sparked by Piqué’s decision to trim the sleeves of the shirt he wore for a game against Albania. Many outraged fans assumed he had done so as a political statement, to remove the Spanish flag from his shirt. In fact, there had been no flag on the sleeves – Piqué had simply been adjusting their length for comfort – but the damage had been done.

Having been frequently booed by Spain fans because of his openly Catalan nationalist sympathies, Piqué’s decision had apparently been brewing for some time.

As his region embarks on a potentially crucial period in its relations with the rest of Spain, one its leaders hope will culminate in independence, many observers have drawn parallels between politics and football in recent days.

Piqué’s withdrawal, noted the columnist Jordi Basté, in Barcelona’s La Vanguardia newspaper, was “a memorable metaphor for a Catalonia that is fed up with being misunderstood, punished and slandered”.

That is a succinct description of why many Catalans want independence. The Spanish state, they claim, misunderstands their culture and language; its tax distribution policy punishes their coffers; and its politicians slander and distort their nationalist aims.

However, they fell short of a majority of the popular vote.

Since then, the regional parliament has proceeded with its road map to independence, approving both a statement of intent and a blueprint for a Catalan republic. But in recent days, the pro-independence premier of Catalonia, Carles Puigdemont, has announced some adjustments to that plan, most notably the aim of staging a Scotland-style binding referendum by September 2017.

That proposal is seen as a two-way strategy: on the one hand it appeases the more radical factions of the separatist coalition, particularly in the CUP; but on the other, its lofty aim of persuading the Spanish government to agree on the terms of the vote softens the sharper edges of the independence road map, making it more palatable to Podemos, the leftist force that opposes independence but supports the right to decide.

However, the central government is almost certain to reject the referendum idea, as it has done repeatedly before. Conservative acting prime minister Mariano Rajoy insists any such referendum and any move towards independence would break the law.

Crucially, Puigdemont seems determined to proceed with the vote, regardless.

Polls show around 80 per cent of Catalans would like to vote on their future, with nearly half of the region’s people supporting independence.

The glaring weakness in the plan is the risk that if the referendum fails, as expected, to secure the blessing of Madrid, it will lack credibility and see a low turnout. A non-binding illegal referendum staged in Catalonia in 2014 suffered such a fate.

Barcelona and Madrid have already become locked in a legal battle, with four Catalan politicians facing charges for organising the 2014 referendum and the speaker of the region’s parliament, Carme Forcadell, being investigated for overseeing the approval of the independence blueprint in July.

But while the legal wrangles continue, another consideration is the economic impact of a unilateral Catalan breakaway. Separatists were heartened recently when Nobel Prize-winning economist Joseph Stiglitz said that “clearly, an independent Catalonia would be very viable”.

“If [breaking from Spain] is difficult from a symbolic point of view, just imagine how difficult it would be in practical terms,” he says. Many have pointed to the fact Catalonia would have to reapply for European Union membership. Arbós also warns that Madrid could choose to play politics with pensions and social security payments.

“If we Catalans – and I’m one of them – tend to complain now that the Spanish government doesn’t fulfil its legal obligations, imagine what would happen if there was unilateral secession,” he says.

In the past, Arbós has advised the socialists on a proposal for a “third-way” solution envisaging a federal Spain.

But party leader Pedro Sánchez, the promoter of the idea, was overthrown in a chaotic putsch earlier this month.

With the staunchly centralist Rajoy finally looking likely to gain the parliamentary backing needed to end a 10-month political impasse in Spain and form a new government, such moderate proposals look likely to be marginalised.