Belgian police arrested three people on Saturday in raids in a poor, immigrant quarter of Brussels as they pursued emerging links between the Paris attacks and an Islamist bastion in France's northern neighbour. Video: Reuters 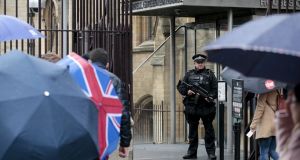 Police guard the Houses of Parliament in London in a show of heightened security following the attacks on Paris. Photograph: Suzanne Plunkett/Reuters 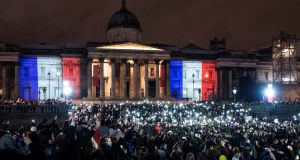 Hundreds of people attend a vigil for the victims of the Paris attacks in Trafalgar Square on Saturday night. Photograph: EPA/Will Oliver

Within hours of Friday night’s attacks in Paris, the atmosphere in central London had tightened perceptibly, as armed police patrolled near major landmarks and West End theatregoers queued in the rain while ushers searched their bags on the way into every theatre.

Amid the grief and sympathy for those who died in Paris, everyone was asking if London could be the next city to be hit. Almost as soon as the question had formed, David Cameron was answering it in a televised address.

“It is clear that the threat from ISIL is evolving. Last night’s attack suggests a new degree of planning and co-ordination and a greater ambition for mass casualty attacks. We must recognise that however strong we are, however much we prepare, we in the UK face the same threat,” Cameron said.

London suffered its own Islamist terrorist outrage a decade ago, on July 7th 2005, when a series of co-ordinated suicide bomb attacks targeted civilians using public transport.

Fifty-two people were killed and more than 700 injured.

On the face of it, Britain is as likely a target for the so-called Islamic State, or Isis, as France. Both are former colonial powers in the Middle East and both are fighting Isis in Iraq, although France is also attacking the terror group in Syria.

Like France, Britain has seen hundreds of its citizens traveling to Syria to fight with Isis and similar groups – more than 700, according to recent estimates. And a number of high-profile British recruits to Isis have recently been killed by western drone strikes, including Cardiff-born Reyaad Khan in August, and Mohamed Emwazi, known as Jihadi John, on the day before the Paris attacks.

Mark Rowley, Britain’s most senior counter-terrorism police officer, called on the British public to go about their normal lives on Saturday, and not to be intimidated by the events in Paris.

He said there would be extra police officers, extra checks and extra vigilance but he stressed that the success of counter-terrorism depended on the co-operation of communities in Britain.

“It comes down to trust between communities and the ability for the public to trust the police and work with us and supply us with the sort of information they have been very effectively over the past year,” he said.

The level of electronic surveillance in Britain is unparalleled in western Europe, with up to 5.9 million CCTV cameras - one for every 11 people - according to a study by the British Security Industry Authority two years ago. Earlier this month, Home Secretary Theresa May acknowledged for the first time that British governments have since 1994 been issuing secret directives to internet companies to hand over bulk internet data to the security services.

After the 9/11 attacks in 2001, the UK initiated a counter-terrorism strategy called Contest, made up of four Ps: Prepare for attacks, Protect the public, Pursue the attackers and Prevent their radicalisation in the first place. In the years after the 7/7 attacks, tens of millions of pounds was spent on the Prevent strategy, with more than 1,000 schemes involving local authorities, schools, prisons, mosques and community groups.

Among the most important relationships are with mainstream Muslim groups, which are eager to prevent young Muslims being drawn to extremist groups.

Those regarded as being at risk of radicalisation can be referred to a programme called Channel, which uses religious experts as well as social workers and psychologists to counsel them.

There has been a five-fold increase in arrests related to counter-terrorism in the past six months and police say that some of these have been the result of information provided by the Muslim community.

Similar de-radicalisation programmes are in operation in France but the British authorities are hoping that better relationships between police and communities, combined with relentless intelligence work, will help to reduce the risk of a repeat of Friday’s events in a British city.