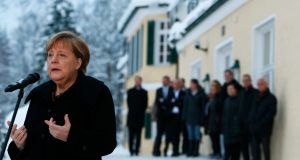 Angela Merkel has mastered many challenges in the last decade, from the financial and euro crises to the Kiev-Moscow military standoff. But none was quite as delicate as the dilemma the German chancellor faces now with Europe’s growing migration crisis.

Germany accepted 1.1 million asylum seekers in 2015 but faces growing domestic pressure to do something – anything – to stop another million arriving this year.

Merkel is pushing for a pan-European solution, the only realistic response she sees to an exodus of historic dimensions. But with the political clock ticking, and no EU consensus in sight, the need to secure her own political survival may force her to take national measures that could finish off Schengen, Europe’s crumbling passport-free travel area. And that, Merkel fears, could undermine the EU as a whole. Demands for German national measures reached a crescendo on Wednesday evening. In the snowy Alpine retreat of Kreuth, Merkel felt the full fury of her Bavarian allies, the Christian Social Union (CSU). They are on Germany’s migration frontline and feel the heat from their voters. Even in the depths of winter some 2,000 people are still crossing daily into Germany. Of 70 border crossings with Austria, they said, just five are manned.

And now they fear Austria’s cap on asylum applications, announced on Wednesday, will increase further the flows to Bavaria. The CSU message to Merkel was clear: this can’t go on.

Markus Söder, state finance minister and Bavarian leader-in-waiting, told the chancellor that opening German borders last August to Syrians trapped in Hungary was the humane thing to do. “But keeping them open is a mistake and a breach of the law,” he said.

Merkel argues that the Geneva Convention obliges Germany to accept all who seek asylum here. But the CSU disagrees, pointing to a legal opinion it commissioned from a former constitutional court judge. He argued that the obligation to accept asylum seekers was not absolute, particularly if an applicant arrived from another country where they faced no threat.

Despite the barrage of pleas and threats in Kreuth, a stony-faced Merkel refused to budge. With more on her mind than Bavaria, she insisted the only credible solution to this crisis was a European mechanism to redistribute asylum seekers throughout the bloc.

Austrian-style asylum caps or Swedish-style border checks were out of the question in Germany, she argued. Such actions by the EU’s largest member state would cause a humanitarian disaster in the Balkans and trigger the end of the European Schengen zone – if not worse.

CSU officials believe the opposite – that failure to act will bury Schengen and, they murmur, Angela Merkel.

CSU officials have been threatening Merkel for months on migration but she knows that, for now at least, the Bavarians’ bark is still worse than its bite

She has greater concerns than the CSU. For one thing, the success of her migration plan hinges on the goodwill of two countries that are not card-carrying members of the Angela Merkel fan-club.

The Turkish government, in Berlin yesterday for bilateral talks, has accepted €3 billion in EU funds to encourage refugees to stay closer to home. But Ankara has little love for the German leader, the loudest European opponent to their EU accession. And what of Greek efforts to set up refugee registration “hotspots” on its outer EU border? Athens has promised they will be operational by the end of February, but increasingly paranoid Berlin officials suspect a deliberate go-slow by the governing Syriza party – payback for the German-led euro-crisis strategy.

Greek ministers deny such conspiracy theories, citing problems in setting up the hotspots, which are to be used to identify genuine asylum seekers who can then be sent on to other member states under an EU-wide relocation programme.

The biggest challenge in the long term, Greek officials say, is the growing list of reasons EU member states give for refusing to take migrants.

Berlin’s other great concern over its migration strategy is a worrying lack of European allies. “Unlike in the euro crisis, some of our partners believe they are not affected by this problem, something I consider to be mistaken,” said German finance minister Wolfgang Schäuble. Sounding the alarm this week at the World Economic Forum in Davos, Germany’s last dyed-in-the-wool European said that failure to strike an EU redistribution deal on migrants would undermine the Schengen free travel bloc. “If the Schengen system is destroyed then Europe is in acute danger, economically and politically,” he said.

Whether by accident or design, the message Berlin is hearing from its EU partners is clear: you broke EU migration rules last summer, Angela, you fix it.

Berlin disputes this, saying Merkel’s limited invitation to Syrians trapped in Hungary was widely misunderstood as a come one, come all. But that is now moot: the damage is done and Germany feels it is fighting a losing migration battle against pan-European nimbyism.

Warnings from Berlin or Brussels – about tomorrow’s cost of a Schengen failure – weigh less heavily on EU leaders’ minds than today’s challenges: whether it is David Cameron’s Brexit battle or François Hollande’s fight against terrorism and Marine Le Pen. So how do you put together a pan-European solution, the only kind Merkel feels can work in the long term, when almost all of your partners are not interested? As the shutters come down across the Schengen bloc, Merkel’s nightmare scenario is that all asylum roads will lead to Germany.

In Merkel’s governing Christian Democratic Union (CDU) party, even her most loyal allies are nervous. Three state elections are looming in March and the asylum-seeker struggle is a massive local issue. That means there is a direct link between CDU state election results and Merkel’s efforts to strike an EU deal that provides a noticeable and long-term reduction in inward migration to Germany.

If no deal is done by March, and voters punish the CDU, the growing anti-Merkel murmurs will become impossible to ignore. “We won’t we able to stand this much longer,” warned Bavarian state premier Horst Seehofer.

After his guest had departed for Berlin, he added darkly: “Long-in-the-tooth chancellors eventually only believe in themselves.”