City in flames: the bombing of Dresden

Seventy years ago, near the end of the second World War, British planes dropped 1,400 tonnes of bombs on the German city. Bruno E Werner, father of the Ireland-based sculptor Imogen Stuart, was an eyewitness to the terrible results 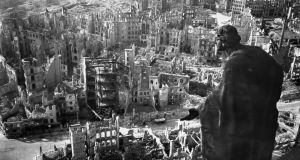 Destroyed: looking over the skeletal city from the town hall in 1945. Photograph: Walter Hahn/AFP/Getty 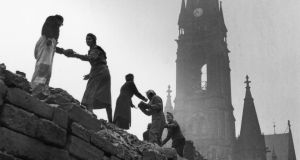 Rebuilding: women salvage bricks from the rubble of Dresden in 1946. Photograph: Fred Ramage/Keystone/Getty

Bruno E Werner talked only once to his daughter about seeing Dresden burn. She – the Ireland-based sculptor Imogen Stuart – remembers that it was a conversation about the elongated figures of the sculptor Alberto Giacometti.

“My father couldn’t stand Giacometti’s work,” says Stuart, “because it reminded him of how, after the Dresden firestorm, he saw people wrapped around lamp posts like dried leaves.”

At 9.45pm on February 13th, 1945, 800 British planes dropped 1,400 tonnes of explosive and phosphorous bombs on Dresden, the city known as “Florence on the Elbe”. Until then the city had been spared the ravages of war.

Within minutes it was engulfed in a firestorm that killed an estimated 25,000 people, many asphyxiated as the flames sucked up oxygen. For propaganda purposes the Nazis added a zero to the death toll, and their figure was accepted right into the cold-war era.

Seven decades after the flames were extinguished and Dresden rebuilt, the debate rages on about whether the bombing was a war crime against defenceless civilians or a justified attack on a Nazi stronghold and strategic war facilities.

It was sheer chance that Werner found himself in Dresden hours after the bombs fell, says Stuart’s sister Sibylle May.

“He was on the run, and a doctor friend sent him to hide in Dresden, where he’d grown up and gone to school,” she says.

Werner, who was born in 1896, in Leipzig, served as theatre critic and arts editor at the leading Deutsche Allgemeine daily, but he was forced to resign in 1938 because he had a Jewish mother.

In 1943 he began writing his novel Die Galeere, a lightly fictionalised attempt to address neither Nazi perpetrators nor victims but people, like himself, in the middle who allowed the calamity to happen. His eyewitness account of the bombing’s aftermath remains unsurpassed and helped Die Galeere become a bestseller in 1949.

Even Thomas Mann sang its praises. In an October 1950 letter to Werner, he wrote, “Pages such as your Dresden chapter are something one will never forget.”

Werner died in 1964 in the Swiss resort town of Davos. A new edition of his novel, published in English in 1951 as The Slave Ship, is long overdue.

‘Through the roof a yellow umbrella of smoke shot into the sky, crackling and hissing’: from ‘The Slave Ship’, by Bruno E Werner
The passengers stood in the train station, talking excitedly.

“Dresden’s all in flames,” said one of the people waiting on the platform at Plauen. To Georg’s question, he replied that he’d heard it from the stationmaster. Apparently bombs had really been dropped on Dresden.

A silly way of putting things, Georg thought to himself – as though a city with a population of 600,000 could be “all in flames”. How many severe attacks on Berlin he had been through, and every time only districts or just a group of streets had been hit. From what other people were saying, it did seem as if something had happened in Dresden, but nobody knew any details.

The train came to a stop outside a little station in the suburbs of Dresden.

“All passengers leave the train! Last stop!” the guards shouted. Georg pushed his way through the throng. The sky ahead of him was orange and there was a queer smell in the air. As he passed through the ticket gate, he felt a sort of dry rain on his skin and rubbed his hand over his face. It was black with soot.

Now the first burning houses loomed up on the outskirts of the city. When the houses came to an end he could see that the whole of the far bank of the Elbe to his right was on fire. It looked like some sort of celebration was going on.

Hot gusts of air came blowing from all directions from the burning buildings. He opened his heavy winter coat and pushed his scarf into his pocket. There were fewer and fewer people to be seen in the street, now once more flanked by isolated burning blocks of houses. So now Dresden had got it too, and it must have caused all the more upheaval as everyone had been reckoning only with the Russian army and not with severe air raids. Flickering veil The rain of ash had now become a flickering veil. Georg coughed, wiping away particles that stuck to his cheek. He was getting near to the bridge, where the houses stood further back and there was a view of the old town on the opposite side. A lurid yellow and white glare emanating from the buildings on the riverbank.

Above the coal bunkers on the embankment stood cobalt-blue cones of light, fringed with lemon-yellow glimmer. The sky was vermilion. The opera house was like a blast furnace; through the roof a yellow umbrella of smoke shot into the sky, crackling and hissing. Only the black outlines of the Hofkirche church and the Hotel Bellevue were rigid and motionless, while on the broad dome of the Frauenkirche little flames danced about like sprites. In front of it the river flowed by, mirroring the scene on the bank. It was a spectacle like something presented by Saxony’s King Augustus – a gala with fireworks and tens of thousands of torches.

There was no one to be seen anywhere. Something terrible must have happened.

In the vague half-light stood the broad stone staircase of the Brühlsche Terrasse.

This had been one of the most beautiful squares in Germany. He remembered how as a boy he had gone round the Hofkirche on a class outing, how they had sat on little camping stools with their art teacher, sketching the Augustus Bridge, how he had been allowed to go to the opera for the first time in his new confirmation suit, and after dancing lessons how he had secretly gone out with Edith.

Finally he remembered the clear Sunday morning when he had fallen in for parade in the middle of this square, steel-helmeted, his war-wounded arm in a sling.

The king, stepping out of a circle of officers with high white plumes waving on their glittering helmets, had come over to him. In a hoarse-voiced, easy-going Saxon accent he’d said, “Well, I dare say you’re glad to be back home again, eh?”

Georg was startled out of these reminiscences by what sounded like a landslide.

The burning houses to his left and right now seemed to be moving, like gigantic, loose theatre backdrops. He began to run, jumping over flames shooting out of the ground. As he reached the open square, walls tumbled in the street behind him and a white-hot lake spread out, with fetid smoke rising from it.

Corpses among the trees In the Grosse Garten park, two bodies glimmered where they lay sideways across the path. They seemed to be children, one laying crosswise over the other. He walked around them but an instant later stumbled on something soft and shapeless, which gave under his feet. It was better to go across the lawn and through the trees to the other side.

A wan grey light showed the vague outlines of a clearing. He fell over a smashed tree top lying on the ground. Now he could see quite clearly that there were corpses lying about among the trees, too. They lay scattered, this way and that, at brief intervals, like huge autumn leaves blown down from the branches. There must be hundreds of them, a boundless field of the dead disappearing into the dim darkness. He decided to turn back.

Suddenly the smell of burning rose into his consciousness again, and the nauseating choking taste of it lay on his tongue.

He walked a few paces back towards the street, saw close in front of him a woman’s red skirt on the ground and felt the blood draining out of his head. Shutting his eyes, he leaned against a thick tree trunk, slid down and sat on the cold, wet earth. He felt like a dead man among thousands of the dead.1

1 Bobby Storey: The IRA's planner and enforcer who stayed in the shadows
2 Transgender Cork farmer (65) surprised at positive response to telling her story
3 Q&A: How close are we to having a Covid-19 vaccine?
4 Covid-19: Travel restrictions unlikely to be lifted before July 20th
5 Is Donald Trump losing his touch?
Real news has value SUBSCRIBE