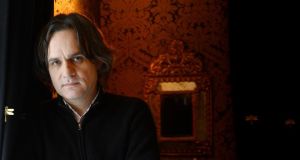 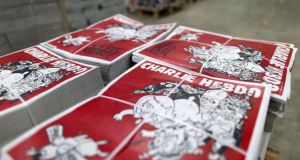 Charlie Hebdo, the satirical weekly where 12 people were murdered, including a building worker and two policemen, in an attack by jihadists on January 7th, will return to French newsstands today after a six-week absence.

Seven million copies of a “survivors’ issue” were published one week after the attack. Two and a half million copies today’s “renaissance” issue will be printed. Before the attack, the newspaper’s circulation was fewer than 40,000 copies.

The cover of the “renaissance issue” shows a panicked dog running for dear life, with a copy of Charlie Hebdo clenched in its jaw. A pack of dogs follows in hot pursuit, bearing the faces of Front National leader Marine Le Pen, former president of France Nicolas Sarkozy, Pope Francis and a jihadist carrying a Kalashnikov in its teeth.

“We tried to get back to the old Charlie from before,” the newspaper’s director Laurent Sourisseau, known as Riss, told France Inter radio.

Riss was co-director of Charlie Hebdo with Stéphane “Charb” Charbonnier. Riss found himself next to Charb’s body on the floor of the conference room. His right shoulder was shattered by bullets and he still wears his arm in a sling.

Riss said he was depressed by the February 14th-15th attacks in Cophenhagen when he wrote the editorial in this week’s edition. “We have to be lucid,” he said. “Even if the guys who did this were killed, there will be others!”

Riss’s editorial says doubt is the enemy of all religions. He contrasts the lack of doubt felt by the killers with uncertainties within Charlie Hebdo’s staff. Georges Wolinski, one of the paper’s best-known cartoonists, who was killed on January 7th, had asked in 2011: “Did we go too far?”

“I’m always stunned by people who have a lot of certainties,” Riss said. “It’s braver to express one’s doubts. We’re a newspaper that asks itself questions.”

Charlie Hebdo has worked from the offices of Libération since the attack, and is about to move to a secure site in Paris’s 13th district. President François Hollande said the weekly must launch a new generation of cartoonists, but management is finding it difficult to recruit journalists willing to risk their lives.

“Who has the courage to fight this battle?” Riss asked rhetorically. “Who wants to fight for the freedom to commit blasphemy, who wants to defy religion, if it means ending up with 10 cops protecting you 24/7? No one.”

Before the attack, Charlie Hebdo was struggling to raise €200,000 to pay its debts. It is now one of France’s richest publications, with close to €15 million at its disposal, of which €4.2 million was donated in the wake of the murders. Some of the money will go to the victims’ families.

“Charlie Hebdo wasn’t made to have so much money,” Richard Malka, the newspaper’s lawyer for the past 22 years, told Le Monde. Malka defended the former International Monetary Fund director Dominique Strauss-Kahn at his trial in Lille for the past three weeks. Charlie Hebdo has also hired Strauss-Kahn’s press attaché Anne Hommel.