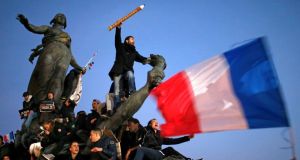 Rallying after the terrorist attacks in Paris on January 11th, 2015. Photograph: Stephane Mahe/Reuters

Beyond its borders, France is too often drawn as a crude caricature of itself. In the English-speaking world, hemmed in by its linguistic limitations, it can seem as if the country is of interest mainly for the ways in which it conforms to outdated, empty stereotypes.

France is either a throwback, a curiosity clinging to an outdated socio-economic model, sitting helplessly atop a tinderbox of social rage; or it is the apogee of continental civilisation, a sunny idyll where everyone works 35 hours, lives in a Haussmannian apartment and eats good food.

Of course, none of this comes close to describing the messy, contradictory, richly layered if prosaic reality of a diverse country with its strengths and weaknesses, negotiating many of the same strains and tensions as every other big, rich western liberal democracy.

The events of the past 10 days have been a reminder of some of the ways in which France is the same – and different.

With the killing of 17 people in three terrorist attacks in as many days, Paris experienced a similar trauma to that of Madrid in 2004, London in 2005 or – on a larger scale – New York in 2001.

It reacted with the same visceral shock and outrage. Politicians struck a note of defiance and rallied to the flag of national unity. Security was stepped up and debate ensued on how much freedom should be sacrificed for security and social harmony.

But then, last Sunday, almost four million people took to the streets of towns and cities across France and silently marched in defence of democracy and freedom of expression.

It is difficult to imagine a more powerful, moving or eloquent response to the horror, or one more rooted in the French tradition.

It transformed the mood overnight from one marked by sadness and fear to one of pride and purpose. For once, the clichés of the political culture – solidarité, rassemblement, fraternité and the rest – seemed reanimated, renewed.

It would be naive to think this changes everything, it may well change nothing at all.

The political truce will end once politicians feel a decent interval has elapsed.

But, by reminding us of the mobilising force of some old, cherished ideals, and of the powerfully eloquent way in which they can be upheld, France has done us all a service.