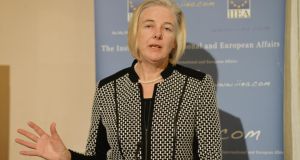 The incoming secretary general of the European Commission assumed his new role on Tuesday, marking the end of the 10-year tenure of Irish official Catherine Day.

Ms Day took leave of staff at the European Commission in Brussels on Monday. She was appointed in 2005 to the post, one of the EU’s top jobs, having worked in the commission since 1979.

The UCD graduate has played a leading role in various aspects of EU policy, including recent official discussions on the forthcoming UK referendum on EU membership, the Greek crisis and migration policy. It is understood she is also highly regarded by German chancellor Angela Merkel among others.

A native of Mount Merrion in Dublin, Ms Day began her career in Brussels in 1979, having previously worked for the Confederation of Irish Industry. She worked for a number of EU commissioners, including Ireland’s Richard Burke and Peter Sutherland and former British commissioner Leon Brittan.

She was appointed deputy director general for external relations under Chris Patten in 2001 and was involved in the EU’s enlargement in 2004 which saw 10 central and east European states join.

European commissioner Kristalina Georgieva has been tasked with ensuring the commission achieves a 40 per cent female representation in senior and middle management by the end of 2019.

While women outnumber men by 54.5 per cent to 45.5 per cent in the commission as a whole, only about 30 per cent of managers are female.