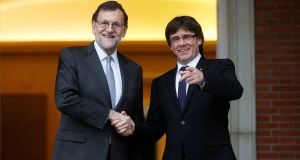 Catalonia’s premier Carles Puigdemont has insisted his region will persevere with its independence bid, despite meeting Spanish prime minister Mariano Rajoy this week and regardless of whether there is a change of government in Madrid.

Wednesday was Mr Puigdemont’s 100th day as premier and he marked it by travelling to Madrid for a 2½-hour meeting with Mr Rajoy, raising hopes of a thaw in relations between Catalonia and the Spanish government.

However, although the encounter appears to have been cordial, Mr Puigdemont has reiterated his resolve to continue with the northeastern region’s push for an independent state, telling reporters on Friday he had invited the Spanish government “to discuss the terms under which Catalonia should become an independent state within the European Union”.

Catalonia and Madrid have been on a collision course since 2012, after the Spanish government refused to negotiate greater financial autonomy for the region with Mr Puigdemont’s predecessor, Artur Mas.

Nationalists used Catalan elections in September 2015 as a plebiscite on independence. They fell short of a majority of votes, but secured a narrow majority of seats in the regional parliament, claiming this gave them the mandate to begin the break from Spain.

The separatist parties – Mr Puigdemont’s centre-right Convergence, the Catalan Republican Left (ERC) and the radical leftist Popular Unity Candidacy (CUP) – have since started drawing up legislation for an independent state.

The roadmap suggests its creation would be completed in 2018, after the creation of a Catalan constitution to be approved by referendum.

“I told Mr Rajoy the image of Spain would be tremendously improved internationally if he agreed on the staging of a referendum with Catalonia – the Scottish route,” he said.

The Spanish government has ruled out such a vote and, although Mr Rajoy was relatively conciliatory after Wednesday’s meeting, he appeared unwilling to give ground and negotiate on the independence issue.

On Friday, Mr Puigdemont highlighted the alleged disparity between the money Spain’s richest region contributes to the treasury and the relatively small amount it receives back in state investment, describing this situation as “ridiculous, almost offensive” and warning it was “financially strangling” Catalonia.

Since inconclusive general elections in December, Spain’s main parties have failed to agree on the creation of a new government and if the deadlock continues next week, fresh elections will be called.