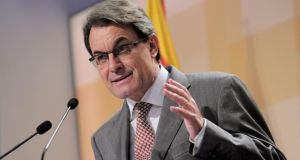 Catalans plan to form a “human chain” tomorrow that will stretch across their region as part of a campaign to hold a referendum on independence from the rest of Spain.

The 400km (250-mile) chain will involve people linking arms from one side of the northeastern region to the other. With the Catalan-language slogan “Via Catalana cap a la Independència” (“the Catalan way towards independence”), the act seeks to highlight the recent swell of support for a formal break with the Spanish state.

It will wind through Catalan town and cities, passing such landmarks as the Antoni Gaudí-designed Sagrada Familia basilica in Barcelona and even entering the Camp Nou stadium of Barça soccer club.

“Everyone who believes it is crucial to decide their future and exercise the right to decide is invited on September 11th to show the world that we are one people and that the process [of independence] cannot be stopped,” said Carme Forcadell, president of the Catalan National Assembly (ANC), a grassroots organisation that is organising the human chain.

Significant date
The date of the event is significant. September 11th is known as the Diada, the anniversary of the defeat of Catalan troops at the hands of Bourbon forces in 1714. In the eyes of the region’s nationalists, it marks the beginning of three centuries of repression by the Spanish state. On last year’s Diada hundreds of thousands of Catalans marched through the streets of Barcelona to demand independence, thrusting the issue to the forefront of Spanish politics.

Pro-independence campaigners argue that Catalonia, an industrial hub, receives a raw economic deal from the Spanish state and that Madrid interferes too much in its affairs. They also point to cultural differences between the rest of Spain and their region.

The plan announced last autumn by the region’s nationalist premier, Artur Mas, to stage a referendum on independence in 2014 seemed to put him on a collision course with the central government of Spanish prime minister Mariano Rajoy, which says such a vote would be illegal. But while the human chain itself looks set to be another successful advertisement for the separatist cause, the politics behind the independence project have grown increasingly complex.

Possible delay
Mr Mas, the leader of the CiU coalition, has been the most visible figurehead of the independence push. But last week he appeared to soften his hardline stance, suggesting that if the Spanish government blocked a 2014 referendum, the vote could be delayed until 2016.

The announcement seemed to be partly aimed at appeasing factions within Mr Mas’s own restive CiU coalition who believe the independence drive has been too aggressive.

Reports that Mr Mas met Mr Rajoy at the end of August as part of a discrete strategy by both sides to find a solution to the stalemate have made the likelihood of a vote on independence next year appear to fade.

But Mr Mas’s new conciliatory tone has dismayed the powerful Catalan Republican Left (ERC), a more radical separatist party which supports the referendum plan. “The referendum will go ahead in 2014, whatever happens,” said ERC’s Lluís Salvadó.