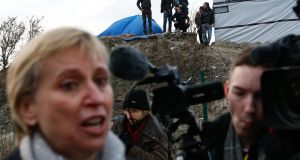 Prefect of Pas de Calais Fabienne Buccio speaks to reporters on Thursday about the expulsion order for the southern part of the camp known as the Jungle. Photograph: Laurent Dubrule/EPA

The prefect of Calais, Fabienne Buccio, has set a new deadline for the clearance of the southern part of the Calais migrant camp known as “the Jungle,” after a Lille tribunal ruled the evacuation could go ahead.

Ms Buccio said about 1,000 people would be given one week from next Monday to move “progressively” to the northern part of the camp or to “welcome centres” scattered around France.

The authorities say it is impossible to have insalubrious tents and shacks in proximity to the structured camp for up to 2,000 migrants that it is building in the north of the Jungle.

“No one must live in the southern part of the camp,” the prefect said. “Everyone must leave that part.”

She added that “social areas” of the southern Jungle, mainly the school and church, would not be razed.

The number of migrants affected is in dispute. The Auberge des migrants association said earlier in the week that 3,450 people live in the southern part of the Jungle. On Thursday it revised that estimate downward to 2,000.

Interior minister Bernard Cazeneuve said earlier in the day that “there was never any question of the French government sending bulldozers into the dunes to disperse the migrants”. But the question of force still hangs in the air.

“Within a week, this movement must have clearly begun,” Ms Buccio said. “If that is not the case, we will call upon public force. I hope we will not have to evacuate by force. We can raze a part of the camp which gives a bad image of Calais.”

At the beginning of January, the prefecture razed a 100m-wide strip of the encampment, between the shanty town and the port road. About 600 migrants in the strip were persuaded to leave.

“We will give them one week to occupy the places put at their disposition” other than the tents and shacks, Ms Buccio said. “I have asked the [humanitarian] associations to relay this message. We are also going to increase the number of rounds to incite migrants to take up those places that are available [in containers] or to move towards other centres.”

The prefect’s strategy is to slowly but surely erode the Jungle, razing it bit by bit, until only the structured, “secure” part comprised of converted freight containers and a women-and- children’s centre is left.

Migrants so far have been reluctant to live in the containers, where they sleep on bunk beds 12 to a room, are not allowed to cook, and must register with a hand print.

They are also reluctant to take the free buses that ferry migrants to centres elsewhere in France, because they do not want to give up hope of reaching Britain.

About 2,700 have reluctantly accepted relocation in recent months. Some were put in hotels in Toulouse, Dijon and Nantes, arrested and threatened with transfer to the first European country they entered, as prescribed by the Dublin convention.