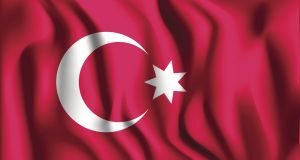 Ottoman Empire flag: Legend has itthat Suleiman’s heart was removed and interred in a tomb built where he died – a site Hungarian experts think they have found. Photograph: Getty Images 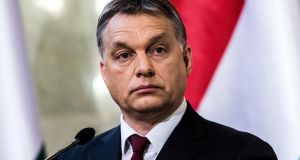 Hungary’s prime minister Viktor Orban said his country had the “right to decide that we do not want a large number of Muslim people in our country”. Photograph: Akos Stiller/Bloomberg

Suleiman the Magnificent 450 years ago was preparing to lead his mighty Ottoman army from Constantinople to Vienna, in an attempt to finally seize the Habsburg capital that had first resisted him nearly four decades earlier.

Since taking power in 1520, he had entrenched and extended Ottoman rule across the Middle East, North Africa and the Balkans, and presided over a golden age of artistic achievement and legal reform which earned him the moniker Suleiman the Lawgiver in the Islamic world.

By 1566, Suleiman ruled from Mecca to Algiers to modern-day Budapest, but his 13th military campaign would be his last, Vienna would continue to elude him, and he would not survive the year.

In early August, about 100,000 Ottoman soldiers massed at Szigetvar castle in restive southern Hungary, where rebellious Croatian nobleman Nikola Subic Zrinski and his 2,500 men vowed to halt their advance.

The ailing Suleiman, now 72-years-old, nominally commanded his forces from a nearby encampment as they laid siege to Zrinski’s fortress for more than a month.

Days before the final, successful assault on the castle, the great sultan died in the imperial tent – a calamity kept secret from his troops but which, coupled with heavy casualties, stymied the Ottoman push for Vienna.

Suleiman’s body was returned to Constantinople and buried in the mosque that he had built, which bears his name and is still the largest in today’s Istanbul.

Legend has it, however, that his heart was removed and interred in a tomb constructed on the spot where he died – a site Hungarian experts think they have finally found and excavations in the spring will confirm.

Historian Dr Norbert Pap and colleagues believe a hilltop vineyard near Szigetvar hides the remains of Turbek, an Ottoman village that grew up around Suleiman’s tomb until it was razed when the Habsburgs retook the area in 1692.

Pap’s team from the University of Pecs has found Ottoman artefacts at the site, and ground-penetrating radar has revealed what appear to be the remains of other structures that would have been built around the sultan’s mausoleum.

The charts “show walls of big buildings oriented precisely to Mecca. The set up of the buildings fits to the 1664 drawing of Turbek, displayed the tomb, the dervish monastery and a mosque”, Pap told The Irish Times.

Work is set to resume in April at the site, but Pap is already confident enough to say that Suleiman’s tomb has “in all certainty” been discovered, just months ahead of the 450th anniversary of his death.

Though nothing could remain of the sultan’s heart, and it is likely that plunderers long ago stripped any treasure from the site, the discovery would be of great significance to Turkey and the Islamic world.

“I think people in Turkey consider the discovery of the tomb something very important concerning their identity,” said Pap.

“Suleiman the Magnificent represents the ‘peak’ of the existence of the Ottoman Empire, the remembrance of the glorious past. Furthermore the tomb is the only missing mausoleum concerning the Ottoman dynasty. The only one missing, but maybe the most important one symbolically,” he explained.

The find comes at a sensitive time however, as Hungary’s leader Viktor Orban is accused of stoking intolerance and even Islamophobia with his handling of a refugee crisis that he calls a threat to Europe’s Christian identity and values.

He has built fences on Hungary’s southern borders – just 30km from Szigetvar – to keep out mostly Muslim migrants, and said experience of Ottoman rule gives his nation the “right to decide that we do not want a large number of Muslim people in our country”.

“I have to say that when it comes to living together with Muslim communities, we are the only ones who have experience because we had the possibility to go through that . . . for 150 years,” said Orban.

That may rankle with Turkey’s president Recep Tayyip Erdogan, who some call a “neo-Ottoman” for seeking to reconnect his country to its imperial past.

Turkish officials have told Pap that Erdogan hopes to visit Szigetvar for September’s anniversary of Suleiman’s death, and he is well aware of the potential significance of his find, as the refugee crisis again reshapes Europe’s relationship with the Muslim world.

“History is history and not politics, and I consider my task to strengthen the reconciliation,” said Pap. “I think this place could be a symbol of the peaceful co-existence of Islam and western civilisation.”