Passengers flee in panic through dust and debris in the immediate aftermath of a double bomb attack at Brussels airport. Video: Reuters 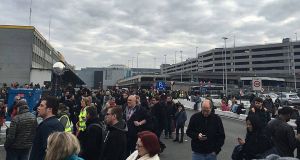 The scene at Brussels Airport after two explosions were heard on Tuesday. Photograph: Bart van Meele/PA

Bart van Meele had planned to take a 30th birthday trip to Milan and had passed through security in the terminal when he heard an explosion.

Speaking to the Press Association from the airport, with sirens wailing in the background, the Apple worker, who was evacuated along with thousands of other people, said: “One of the explosions I heard, and then afterwards people started running. It’s ok, I’m very calm but it’s a bit crazy. You never really think it would happen to you but it’s ok.”

Mr van Meele, who lives in Belgium but is from the Netherlands, added: “We are all next to the airport, there are a lot of people here. I was inside the terminal, and then people started running very, very fast and then it was quiet for a time and then again they started running and it took a while before we got any information.”

Jef Versele (40), from Ghent, Belgium, was also at the airport when he heard the two explosions.

“I was on my way to check in and two bombs went off — two explosions,” he said.

“I didn’t see anything. Everything was coming down. Glassware. It was chaos it was unbelievable. It was the worst thing.”

He added: “People were running away, there were lots of people on the ground. A lot of people are injured.”

Mr Versele was two or three storeys above the source of the explosion but he said many people around him were hurt.

“The bomb was coming from downstairs. It was going up through the roof. It was big.

“About 15 windows were just blown out from the entrance hall,” he added.

He said the emergency services were still securing the area.

Zach Mouzoun, who arrived on a flight from Geneva about 10 minutes before the first blast, told BFM television that the second, louder explosion brought down ceilings and ruptured pipes, mixing water with blood from victims.

“It was atrocious. The ceilings collapsed,” he said. “There was blood everywhere, injured people, bags everywhere.”

“We were walking in the debris. It was a war scene,” he added.

Near the entrance to the Maelbeek subway station, not far from the headquarters of the European Union, rescue workers set up a makeshift treatment centre in a local pub.

Dazed and shocked morning travellers streamed from the metro entrances as police tried to set up a security cordon.

“The metro was leaving Maelbeek station when there was a really loud explosion,” said Alexandre Brans (32) wiping blood from his face. “It was panic everywhere. There were a lot of people in the metro.”

First responders ran through the street outside with two people on stretchers, their clothes badly torn.

The explosions at the airport hit in the middle of the busiest time. Smoke was seen billowing out of the terminal.

Amateur video shown on France’s i-Tele television showed passengers including a child with a backpack running out of the terminal in different directions with their luggage.

Another image showed a security officer patrolling inside a hall with blown-out panelling and what appeared to be ceiling insulation covering the floor.

“I knew it was an explosion because I’ve been around explosions before,” said Denise Brandt, an American woman interviewed by Sky television.

“I felt the explosion, the way it feels through your body. And we just looked at each other and I said ‘Let’s go this way’. It was over there. There was just this instinct to get away from it. Then we saw people running, crying, toward us. So I knew we were going in the right direction and away from it.”

With three runways in the shape of a “Z,” the airport connects the EU capital to 226 destinations around the world and handled nearly 23.5 million passengers in 2015.

Passengers were led on to the tarmac and the crisis centre urged people not to go to the airport.

The explosions happened only days after Salah Abdeslam, the prime suspect in the November 13 Paris attacks that killed 130 people, was arrested in Brussels.