Brothers in ‘Charlie Hebdo’ shootings were on US watch-list 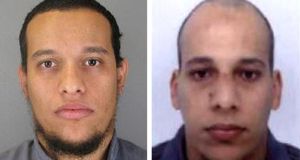 Said Kouachi (34, left) and Chérif Kouachi (32), who were killed in a police shootout in Dammartin-en-Goële yesterday. The brothers had been on the US no-fly list. Photograph: Getty Images

The two brothers who were killed after a siege at a print works north of Paris yesterday had been tracked as potential jihadists, US counterterrorism officials have said.

The New York Times, citing the American officials, reported that Said Kouachi (34) and his younger brother Chérif (32) were on American database of known or suspected terrorists and had been placed on the US no-fly list, which prevents people of suspicion travelling without their names being cleared by security officials.

Kouachi travelled to Yemen to work with extremists such as al-Qaeda’s branch in the Arabian peninsula, while Chérif was jailed for 18 months for recruiting militants to fight US military forces in Iraq.

He was arrested in France in 2005 as he prepared to travel to Syria and on to Iraq. He was released in 2008 after serving a three-year sentence for his role in the recruitment drive.

The older brother was reported to have spent “a few months” training in small arms fighting and markmanship in Yemen, explaining the skills seen in the attack on Wednesday at the offices of the Parisian magazine and on the street outside when one of the suspects assassinated wounded a French policeman as he lay wounded.

Yesterday Chérif Kouachi told a French news channel that they were sent to carry out the attack by al-Qaeda in Yemen and that the American-born radical Muslim cleric Anwar Al-Awlaki financed his trip to Yemen in 2011.

Mr Awlaki, who called for the killings of cartoonists who insulted the Prophet Muhammad, was killed in an American drone strike in September 2011.

Chérif Kouachi was arrested again in 2010 when his name was linked to an attempted prison escape of Smain Ait Ali Belkacem, a one-time member of the Algerian Armed Islamic Group that carried out bombings and a plane hijacking in France during the 1990s.

Belkacem was sentenced to life in prison in 2002 for bombing the Musée D’Orsay train station in 1995 that wounded 30 people.

French newspaper Le Parisien reported that Chérif Kouachi was suspected of being associated with a Djamel Beghal, a French jihadist who was sentenced to 10 years imprisonment for planning attacks.

French interior minister Bernard Cazeneuve has said that Said Kouachi had no previous convictions but had appeared on the periphery of court cases involving his younger brother.