Bosnia must not be left ignored on margins of EU

Opinion: as Croatia accedes to the EU, Ireland must work tirelessly to help all Balkans 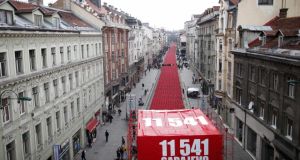 11,541 red chairs pictured along Titova street in Sarajevo on April 6th, 2012, as the city marked the 20th anniversary of the start of the Bosnian war. “As Croatia prepares to join the EU on July 1st and surrounding countries, notably Serbia, move closer to membership, Bosnia faces increasing marginalisation.” Photograph: Dado Ruvic/Reuters

Twenty years ago,Bosnia and Herzegovina was a place of carnage. Europe did nothing concrete to stop the war until over 100,000 people had died and hundreds of thousands more had been wounded, bereaved and displaced. Today, conflict is no longer a daily reality in Bosnia but its underlying issues remain unresolved.

Across the western Balkans, efforts are under way to find solutions to the problems of the past and to promote the development of the region. EU enlargement is central to this process. This was emphasised at a conference organised by the Irish EU presidency, held at Farmleigh House on May 24th. However, in his keynote address, Tánaiste Eamon Gilmore expressed concern at the lack of progress made by Bosnia and Herzegovina with regard to meeting the criteria for EU accession. This has serious consequences, not only for Bosnia but for Europe.

Return to war?
As Europeans we must ask: do we want lasting peace across our continent? Do we want the stability and reform which EU integration can offer? Or do we want to risk “a possible return to the instability that we saw in the early 1990s” which the Tánaiste warned could result from any stalling of the accession of the western Balkan nations? Yet, as Croatia prepares to join the EU on July 1st and surrounding countries, notably Serbia, move closer to membership, Bosnia faces increasing marginalisation.

Exclusion is not in the interest of the Bosnian people. EU insistence on meaningful reform could benefit the thousands of families who go hungry while politicians enjoy lavish lifestyles and show little desire to change the status quo. The pathway to EU membership should be one in which all the country’s ethnicities can participate. It should promote mutual understanding rather than the perpetuation of division inherent in the Dayton Agreement.

This accord ended the war in 1995, but essentially legitimated the outcomes of ethnic cleansing by splitting the state into two separate entities (Republika Srpska and the Federation of Bosnia and Herzegovina). It is true that Dayton stopped a conflict which had featured the worst atrocities to be committed on European soil since the second World War, including the siege of Sarajevo and the Srebrenica massacre. However, it failed to establish a strong, unified state.

The EU has the potential to offer a better future. This was recognised at the Farmleigh conference by Minister of State for European Affairs Lucinda Creighton and EU commissioner for enlargement and European neighbourhood policy Štefan Füle, who said in their joint statement: “With the accession of Croatia, the EU will literally touch Bosnia and Herzegovina; the shared EU border can become a real bridge if the country can focus on reforms.”

Unfortunately, it appears that the EU, instead of enforcing its own conditions to secure these reforms, prefers to pander to the whims of Bosnia’s political elite. Leading politicians care nothing about reform when, irrespective of their “ethnic” background, they profit from the current inertia.

Difficult decisions must be made. The EU has to realise that its approaches in relation to Bosnia have not worked. Republika Srpska, with the effective imprimatur of the international community, operates as a self-contained fiefdom. Meanwhile, on the Federation side, politicians seem more concerned with gaining personal influence and cross-party bickering than with protecting the national interest.

The EU is completely misguided if it believes these entrenched powers will resolve the present stalemate. Unless the EU takes firm and fair action on behalf of the ordinary citizens of Bosnia and Herzegovina, the country’s entry into the EU will stall.

Renewed tensions
If this is the case, the EU will be directly responsible for creating an isolated, impoverished state which could lead to renewed tension in the region. Europe must not be complicit in Bosnia’s alienation – a new perspective is required.

As the Tánaiste admitted in an Oireachtas debate on May 16th, “now is the time for a comprehensive review of the EU’s engagement with Bosnia and Herzegovina”.

In the final weeks of its EU presidency, Ireland can seize the opportunity for such change, for the sake of the Bosnian people and a truly united Europe.

Mirza Catibušic and Bronagh Catibušic are a Bosnian-Irish couple involved with the Bosnian community in Ireland since the early 1990s, campaigning to raise awareness. Mirza is from Sarajevo, where he sustained serious injuries during the war