One man’s quick thinking helped make the fall of the wall, 25 years ago, a peaceful event

A lookback to November 9th, 1989 when Germany was reunited and the Berlin Wall fell after 29 years. Video: Reuters 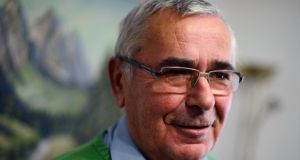 Harald Jäger, who is credited with opening up the border crossing at Bornholmer Strasse that led to the fall of the Berlin Wall on November 9th, 1989. Photograph: John MacDougall/AFP/Getty Images

Harald Jäger has spent the last quarter century denying that he was the man who toppled the Berlin Wall.

He has no plans to change his story now, ahead of German celebrations tomorrow to mark the hated structure’s end 25 years ago. “It wasn’t me who opened the wall, it was the East German people gathered there that evening,” says Jäger.

Despite the border guard’s modesty, it was his snap decision, late on the evening of November 9th, 1989, to throw caution to the wind that ensured the Berlin Wall fell peacefully, joyfully. Jäger was at work at 6pm at the border crossing at Berlin’s Bornholmer Strasse, eating a bread roll in the canteen and watching one of the most famous press conferences in history.

Eight kilometres to the south impatient journalists were firing questions at Günter Schabowski, an official with the ruling SED, about the Politburo’s new travel regulations. Increasingly confused by regulation changes he didn’t understand fully himself, Schabowski, fatefully, said that East Germans would be allowed cross the border “immediately, without delay”.

In the checkpoint canteen, Harald Jäger almost choked at the words, and shouted at the television: “What sort of diarrhoea is the man talking?!” For 28 years East Germany had effectively held their own 17 million people hostage behind two borders: the Berlin Wall and the 1,400km long inner-German border running north to south between East and West Germany.

Most of the East Berlin apparatchiks had gone into hiding and the only superior he could reach told him: “I have no order from above and no orders for you.” By 11pm, the initial trickle of curious East Germans had turned into a flood. With every new arrival, the balance of power shifted away from the border guards’ towards the crowd.

As they shouted “Let us out!”, the guards’ decades-long authority dwindled away for all to see. Hoping to reduce the building pressure, Jäger was told to let across the loudest agitators. But it had the opposite effect, and made the rest even more determined to get across, too. “That’s the moment when I said to myself, ‘It’s up to you to act’,” said Mr Jäger. Around 11.30pm he told his perplexed subordinates: “Open the barrier!” The disbelieving crowd surged passed in a sea of stonewashed denim, moustaches and perms, some gave border guards big kisses on the lips.

“I’ve never seen such euphoria, before or since,” said Jäger, whose role in bringing down the Berlin Wall was dramatised this week as a television movie. After walking down the red carpet for the premiere, Jäger admitted that the fall of the wall meant that his “world collapsed”.

With no border left to guard, he lost his job and struggled to make ends meet as a security guard and then with a newspaper kiosk before retiring to a small apartment north of Berlin.

Tomorrow the border he guarded for decades, which has vanished from Berlin’s cityscape, will be visible again for one night only. Some 8,000 illuminated balloons will mark a 14km stretch of the Cold War dividing line before they are released into the night air.

Yesterday the Bundestag remembered the fall of the wall, which stood just outside the Reichstag parliament building. The guest of honour was singer-songwriter and dissident Wolf Biermann.

Before he sang his song Courage in the chamber, he hit out at the MPs looking on from the Left Party, the successor to the SED that built the Berlin Wall. “You’re the sorry rump of the dragon’s spawn, you’re beaten,” he said. “Sitting here and having to listen to me is punishment enough.”