Salah Abdeslam ‘was ready to restart something from Brussels’, says Didier Reynders 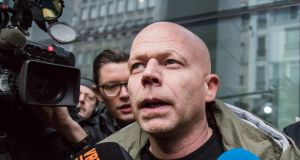 The prime surviving suspect in the Paris attacks may have been plotting more operations with the help of a weapons cache and a network of associates, Belgium’s foreign minister said on Sunday.

Didier Reynders, speaking two days after the capture of Salah Abdeslam, said the suspect’s first statement to a magistrate in Brussels suggested further attacks were planned.

“He was ready to restart something from Brussels,” Mr Reynders said. “That is maybe the reality, because we have found a lot of heavy weapons and we have seen a new network around him.”

Mr Reynders said Belgium and France had so far found about 30 people involved in the gun and bomb attacks that killed 130 people on November 13th in bars, a sports stadium and a concert hall in the French capital.

Capturing Abdeslam alive marks a breakthrough for authorities investigating the deadliest militant strikes in Europe since 2004. Islamic State has claimed responsibility, and the United States warned that it would try to repeat such atrocities.

The French national (26) told a Belgian magistrate on Saturday he had planned to take part in the stadium attack. The admission was disclosed to reporters by the lead French investigator, François Molins.

At a Paris news conference, Mr Molins read from Abdeslam’s statement, saying: “He wanted to blow himself up at the Stade de France and, I quote, backed out.”

Abdeslam, who was shot in the leg and caught by police in Brussels after an intense four-month manhunt, spent his first night in a high security prison in the northwestern city of Bruges. He is due to appear before a judge in Brussels on Wednesday.

“Our investigation must show how he managed to hide from police and security forces,” Belgian prime minister Charles Michel told European broadcaster RTL. Belgium’s federal prosecutor has said the fugitive relied on a network of friends and relatives involved in drug dealing and petty crime.

White House chief of staff Denis McDonough said the United States was working closely with European authorities to ensure they had the training and intelligence to be able to prevent another Paris-style attack. “They say they intend to do this again, so we take that very seriously, and we are trying to draw lessons from what happened on that terrible night in Paris,” Mr McDonough told Fox News.

Belgian prosecutors have charged Abdeslam and a man arrested with him with “participation in terrorist murder”.

Abdeslam’s lawyer said his client admitted being in Paris during the attacks but would fight extradition to France. His elder brother Brahim was among the suicide bombers. – (Reuters)