Belgian police seal off streets around the Grand' Place in the heart of Brussels after extending the maximum threat alert. Video: Reuters 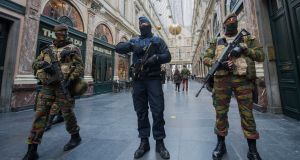 A Belgian police officer and soldiers on duty inside the Galerie de la Reine in Brussels, Belgium. Photograph: Stephanie Lecocq/EPA

Brussels faces its third day of a major security lockdown as police arrested 16 people last night in Belgium, in the wake of the terrorist attacks in Paris 10 days ago.

However, police failed to arrest chief suspect Salah Abdeslam, a Belgian resident who is believed to have carried out the terrorist atrocities in Paris.

With at least two terror suspects at large following the Paris attacks, some 19 raids were undertaken last night in Brussels, with additional raids in the Charleroi and Liege area of the country.

Belgium’s prime minister Charles Michel said schools and universities in Brussels will not open today and the metro system will remain shut for the third consecutive day, as the capital remains at the highest level of security alert.

“What we fear is an attack similar to the one in Paris, with several individuals who could possibly launch several attacks at the same time in multiple locations.”

Acknowledging that the decision would complicate “economic and work life” in the capital, he said the government had to assume its responsibilities, and asked the public for their understanding.

Tensions were high in the city last night after a restaurant close to the Grand Place was evacuated and armed soldiers policed a city-centre hotel. A number of EU council meetings due to take place today at EU headquarters in Brussels will go ahead, including a meeting of euro zone finance ministers, which will be attended by Minister for Finance Michael Noonan.

Minister for Children James Reilly and Minister of State Damian English will also attend meetings in the Belgian capital.

Authorities raised the terror threat for the city to four – the highest possible level – on Saturday citing a “serious and imminent” threat of a Paris-style attack on the city.

Armed police and soldiers patrolled the city centre amid fears that Salah Abdeslam was in hiding in the city. His brother Mohamed, who was released from police custody without charge a week ago, urged Abdeslam to give himself up .

As police continued to question two men alleged to have driven Salah Abdeslam to Brussels from Paris on the night of the attacks, the lawyer for one of the men, Hamza Attou, said her client believed Abdeslam was equipped with a suicide belt and was ready to blow himself up.