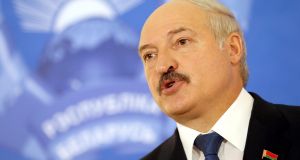 Alexander Lukashenko: his re-election five years ago led to mass protests and imprisonment of opposition figures, but support has risen since he cast himself as a guarantor of stability in economic crisis and over neighbouring Ukraine. Photograph: Tatyana Zenkovich/EPA

Exit polls in Belarus showed President Alexander Lukashenko winning a fifth term by a landslide on Sunday in elections that could see an easing of relations with the West and raise questions about his ties to Vladimir Putin’s Russia.

Mr Lukashenko’s re-election five years ago led to mass protests and the imprisonment of leading opposition figures, but support for his 20-year regime has risen since he cast himself as a guarantor of stability in the face of economic crisis and a pro-Russian separatist conflict in neighbouring Ukraine.

The West has long ostracised the regime, described in 2005 by US secretary of state Condoleezza Rice as “Europe’s last dictatorship”, over its human rights record and clampdown on political dissent. It has imposed economic sanctions on some Belarussian officials and firms.

Warming up to the West

“We have carried out everything the West wanted on the eve of the elections . . . The ball is now firmly in the West’s court,” he said.

Exit polls showed him winning 80 to 84 per cent of the vote, slightly more than the 80 per cent registered in the 2010 elections. Turnout was at 81 per cent two hours before polls closed, according to the central elections commission.

The European Union will lift its sanctions on Belarus for four months after the vote, barring any last-minute crackdown, diplomatic sources said on Friday.

Previous elections in Belarus were considered unfair by western observers and the Organisation for Security and Cooperation in Europe, which was monitoring the vote, said in September the ballot represented a “pivotal moment” for Belarus to demonstrate a willingness to hold free and fair elections. – (Reuters)