Battle of the oligarchs

As Ukrainians prepare to vote in next week’s presidential elections, the region’s richest people are fighting to keep power and influence 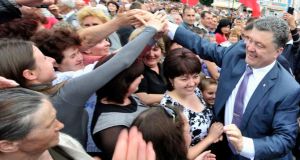 Like so many settlements around Donetsk, Oktyabrsky sits next to a coal mine, its lift tower jutting like an old tooth from the dark earth. But two buildings distinguish this otherwise typically gritty district of eastern Ukraine. One is the shiny blue Dolphin sports centre, with its Olympic-size swimming pool; the other is the Akhat-Jami mosque, named in memory of its chief patron, Akhat Bragin.

Bragin was an ethnic Tatar from hard-scrabble Oktyabrsky who rose to become chief of one of the most powerful business clans in post-Soviet Donetsk. Alik the Greek, as he was known, survived several assassination attempts, including one by gunmen who strafed the pigeon coop of his house near Oktyabrsky when he was visiting his birds.

His enemies eventually killed him, and several associates, with a bomb planted in the stadium of Shakhtar Donetsk, the football club that Bragin owned. It is not clear who ordered the murder, and it is just one episode in the lurid history of 1990s Donetsk, which was a bloody place to do business even by the startlingly violent standards of the time across the former Soviet Union.

One of Bragin’s most promising deputies was delayed by traffic on the way to that fateful match and escaped the explosion. Rinat Akhmetov, another Tatar, who was born into a mining family near Oktyabrsky, would go on to take over Shakhtar, complete construction of Bragin’s mosque and help build the Dolphin sports centre on his way to becoming Ukraine’s richest man.

Now the 47-year-old controls a vast empire based on the metal works and mines of Donetsk, and his property portfolio includes London’s most expensive flat, One Hyde Park, in Knightsbridge, which he bought for a reported €167 million.


Ousted
But these are tough times for Akhmetov, perhaps the hardest since the 1990s. The man he helped make governor of Donetsk – then premier and ultimately president of Ukraine – was ousted in the pro-western revolution in February. Viktor Yanukovych fled with his top political allies to Russia, and the party he led with copious funding from Akhmetov fell into disrepute and disarray.

Driving past Oktyabrsky now, cars are stopped and searched at checkpoints by a motley crew of masked gunmen who support the self-proclaimed Donetsk People’s Republic. This loose grouping of insurgents has seized the main administration buildings in the city of Donetsk and more than a dozen towns in the surrounding region and the neighbouring province of Luhansk.

Last Sunday the grouping held a referendum in which it claimed that an overwhelming majority of voters had opted to split from the rest of Ukraine. The next day, amid cries of derision from Kiev and the West, it asked to join Russia.

Barely three months ago Yanukovych and Akhmetov – probably in reverse order – were considered the most powerful people in Donetsk, which is economically one of Ukraine’s most important regions. Now the former has gone and the latter’s hold on his fiefdom is being challenged by new national leaders and by insurgents suspected of acting on Russia’s orders.

As Donetsk descended into anarchy, Akhmetov’s apathy was striking. He seemed unwilling to categorically support or oppose a fledgling government backed by the West and rejected by Moscow, and he failed to defend Ukraine from the armed separatists roaming Donetsk.

His ambivalence stood in stark contrast to the reaction of Ukraine’s second-richest oligarch, Ihor Kolomoisky. Ukraine’s interim president appointed Kolomoisky governor of another vital industrial region, Dnepropetrovsk, which borders Donetsk to the west. And whereas Akhmetov’s territory is now wracked by a bloody anti-terrorist operation, his rival rules over a haven of pro-Kiev stability.

Kolomoisky, who is 51, took the fight to the separatists, offering $10,000 for every rebel captured and $200,000 for every official building reclaimed. The billionaire’s defiance of Russian influence in Ukraine (he recently described President Vladimir Putin as “a schizophrenic of short stature”) has won him powerful friends in Kiev and enemies in Moscow.

Russia has put pressure on Kolomoisky’s Privat Bank, and Putin has called him an imposter and a scoundrel for allegedly breaking a deal with Roman Abramovich, a friend of the Kremlin.

Kolomoisky is also believed to be funding a new special police unit called Dnepr, which rebels and Russia accuse of killing two civilians in the Donetsk region town of Krasnoarmeysk last weekend. The unit denies involvement, but its existence has fuelled fears that, as state power crumbles in eastern Ukraine, the region’s most powerful figures will create private armies to defend their interests.

Akhmetov made his boldest step into the chaos this week when workers at his vast metal plant in Mariupol, near Donetsk, started patrolling the city with police who had lost control. With about 300,000 people in eastern Ukraine under his employment, Akhmetov could form a militia with the potential to swing the insurgency either way.


Autonomy
Also this week, Akhmetov stated his support for Donetsk to remain in Ukraine, but with far greater autonomy from Kiev. At the same time he urged the government to end a military campaign against rebels that he said was only inflaming unrest. Kiev is open to decentralisation but refuses to halt its crackdown.

If the east joined Russia, Akhmetov’s empire could be devoured by Kremlin-backed oligarchs, and if it became an unrecognised breakaway region the West would isolate his businesses and probably impose sanctions.

The best outcome for Akhmetov appears to be a federal Ukraine, in which he would have great influence over eastern regions with dramatically enhanced powers. Kiev and the West are wary of such a scenario, however, believing it would leave Ukraine vulnerable to meddling by Russia and power brokers such as Akhmetov.

For millions of Ukrainians who saw the revolution as a rejection of murky dealings and corruption, it is galling to see their nation at the mercy of oligarchs such as Akhmetov and Kolomoisky, and two others who are now fighting for the presidency. Petro Poroshenko, Ukraine’s 48-year-old “Chocolate King”, is expected to beat the “Gas Princess”, 53-year-old Yulia Tymoshenko, in next Sunday’s election.

But the confectionary billionaire and the former energy magnate only serve to embody the grip that big – and often dirty – business still has on Ukraine. What is more, the oligarchs are expanding into the vacuum left by a state in crisis. They are a diverse group, but all possess sharp cunning, fierce determination and a capacity for great ruthlessness when required. All the oligarchs claim to have solutions for Ukraine’s many woes, even those for whom Ukraine’s revolution brought the greatest reversal of fortune.

The 48-year-old billionaire Dmytro Firtash is best known as a key figure in the gas trade between Ukraine and Russia. He is said to know a great deal about the financial arrangements of some of the countries’ most powerful people, including Putin and Yanukovych. Firtash denies both this and the US charges of bribery that saw him arrested on an FBI warrant in Vienna in March. He is fighting extradition from the Austrian capital, having lodged bail of €125 million.

“I’ve invested billions of dollars in Ukraine, and if the country ceases to exist I’ll be bankrupt,” Firtash said this week. “I’m ready to act as a negotiator between Russia and Ukraine,” he insisted, with chutzpah apparently undiminished by his arrest. “I know what to do. If Ukrainian politicians are impotent, I have to step in.”