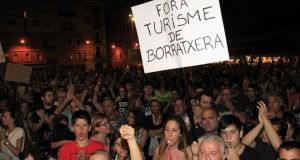 A protester holds up a sign reading ‘Out with binge tourism’ at a demonstration in Barcelona. Photograph: EPA/Marta Perez

It’s an all-too-common sight in many Mediterranean cities and resorts: drunken foreigners noisily staggering through the streets while sober locals look on in disapproval. But in one district of Barcelona, the phenomenon has been particularly rife this summer and disgruntled neighbours are fighting back.

On Saturday, an estimated 2,000 people marched from the Barceloneta area that is the focus of the conflict to Barcelona’s City Hall, to express their opposition to the so-called “booze tourism” they believe is blighting their neighbourhood. It was the sixth demonstration of its kind in recent weeks.

“It’s not that we don’t want tourists, we just don’t want this kind of tourism, which is disrespectful,” Julia Antequera, a long-time resident of Barceloneta, told El Pais newspaper.

The population of Barcelona is 1.6 million, but it received 7.5 million visitors last year, a figure that has tripled over the past 20 years.

Many come for the Catalan city’s rich culture, such as the Sagrada Familia temple or its Picasso museum. But its beaches, bars and nightlife have also made it a magnet for young people who just want to party.

Many of them rent out cheap apartments in areas such as Barceloneta, a working-class district by the sea, for their stays.

In a now-notorious incident, three drunken Italian men cavorted naked through the streets of Barceloneta one morning last month, even wandering into a nearby supermarket.

“They come here and do things that they can’t do in their own countries,” Vicens Forner, a local man who photographed the trio’s antics, told the local media.

Mercè Homs, a politician representing the area, said authorities are trying to change the situation.

“It’s important to remember that in Barcelona we can’t allow absolutely any kind of behaviour,” she said last week.

“We are very clear that we have to look after local people, who are the ones that give the centre of town its soul and authenticity.”

Locals have claimed that several hundred flats in Barceloneta are rented out for this reason, while only about 70 have permits. Thirty-five such flats were issued with closure orders in just two days of checks last week.

This drive has not been enough to quell local outrage, judging by Saturday’s demonstration. Also, with the Spanish economy relying heavily on a resurgent tourist industry, Barcelona’s authorities and businesses are wary of needing to walk the line between restoring order and not scaring off visitors.

Barcelona mayor Xavier Trias told local radio that “we can’t close all the illegal tourist apartments because we have to do things legally”. However, since the clampdown started, there have been reports of tourists who have arrived in the city to find that the flat they booked online is not available, because it has been sanctioned for not having a permit.