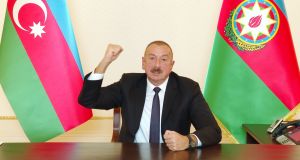 Azerbaijan has rejected a Russian suggestion to send peacekeepers or military observers to Nagorno-Karabakh and insisted that its conflict with Armenia over the disputed region can only be resolved with the involvement of Turkey.

Hundreds of people have been killed in renewed fighting in and around Nagorno-Karabakh, a region of Azerbaijan that has been run by its ethnic Armenian majority since a war in the 1990s that claimed about 30,000 lives.

A Moscow-brokered ceasefire crumbled shortly after it began last Saturday, and energy-rich Azerbaijan – with full backing from chief ally Turkey – insists Armenian forces must leave Nagorno-Karabakh before peace can be established.

Ankara’s forthright role has highlighted its growing influence in the south Caucasus, a region traditionally dominated by the Kremlin. Russia has a military base in Armenia and obligations under a security treaty to defend it from attack, but while criticising Azeri and Turkish belligerence Moscow remains eager to preserve good relations with Baku.

Autocratic Azeri president Ilham Aliyev told Turkish television on Friday that foreign peacekeepers or monitors could be deployed to Nagorno-Karabakh only “at the final stage. After the de-occupation of the territory and the return of refugees. It’s too early to talk about that.”

Russian foreign minister Sergei Lavrov proposed such a deployment earlier this week, when he denounced Azeri and Turkish statements that “a military solution to the conflict exists and is permissible”.

Mr Aliyev also criticised three decades of negotiations on Nagorno-Karabakh chaired by Russia, France and the US, saying that if Turkey had been more involved in diplomacy “this question would have been resolved long ago”.

“That is why we say that without Turkey this problem won’t be solved . . . To keep Turkey out of this process is wrong and impossible,” he told A Haber television. Mr Aliyev also claimed that wealthy Armenian businessmen were flying weapons illegally from Russia to Armenia on civilian aircraft.

Russian president Vladimir Putin discussed the fighting with his security council, and he has previously insisted that Moscow would fulfil its defence obligations to Armenia if the fighting spread to its territory.

Deadly artillery fire continued along the front line on Friday, and Mr Aliyev claimed Azeri troops had taken control of three more villages, after reportedly seizing eight others earlier in the week.

Armenia and Azerbaijan have accused each other of trying to broaden the conflict; Baku’s forces struck two missile batteries inside Armenia on Wednesday, and neighbouring Iran has complained that shells have landed on its territory.

1 Woman stranded in Ireland due to pandemic has ‘miracle baby’
2 Covid-19: Critical cases from NI could put pressure on services in Republic
3 Covid-19: Public urged to ‘stay at home’ as 1,025 further cases confirmed in State
4 Wet pubs and schools reopening led to rise in Covid cases, says Mayo GP
5 US election: ‘Donald Trump needs to go. White America got what they want’
Real news has value SUBSCRIBE