Athens sports a new look to face the future under Syriza

The change sweeping through Greece may have a ripple effect 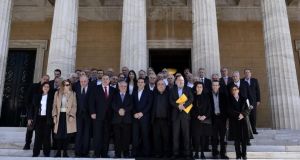 It’s been a week of massive change for Greece. After leading his leftist Syriza party to its first general election victory last Sunday, Alexis Tsipras became Greece’s youngest prime minister in 150 years and the first to dispense with the religious swearing-in ceremony as he took office.

Syriza and its 40-year-old leader have ridden the wave of discontent in Greek society against the effects of five years of crippling austerity that has seen the country’s output plummet by a quarter and the unemployment rate grow to 27 per cent.

Fed up with the 40-year domination of the two parties that made up the outgoing coalition, enough voters were prepared to give Syriza and its youthful leader a bash at running the country.

Two seats short of a parliamentary majority, it had to form a coalition and picked the nationalist, right-wing party Independent Greeks as its junior partner.

Apart from a deep dislike of austerity, the two coalition parties share little in common, which has led some observers to question how long the government arrangement can last. In its first week of office, the new government removed the barriers surrounding parliament, claiming it no longer needed protection from the people.

It has also promised to offer citizenship to hundreds of thousands of second-generation migrants, and made it clear that it has every intention of honouring its pledges to reverse austerity and put the country’s relationship with its lenders on a new footing.

As freshly appointed ministers moved into their new offices, they announced the scrapping of privatisation plans for the state’s power company and ports, the restoration of the minimum monthly wage to its pre-2012 level of €751 and the rehiring of thousands of public sector workers sacked to meet troika quotas for dismissals.

These and other pronouncements spooked investors and the financial markets, where bond yields spiked and bank shares plummeted before receding at the end of the week.

A key figure in the new cabinet is the finance minister, Yanis Varoufakis, a 53-year-old who defies the stereotype of his job as economics professor.

A prolific blogger against the country’s bailout, which he views as a “a toxic mistake” that has resulted in Greece being subjected to “fiscal waterboarding”, he says he’s on a mission to find a new deal that would be beneficial for taxpayers across the EU, not just in Greece.

Easier said than done. At a meeting yesterday with his Dutch counterpart Jeroen Dijsselbloem, who heads the euro zone finance ministers’ group, Varoufakis announced that the new government would not deal with the troika over the current bailout programme, which is scheduled to end on February 28th.

Greece is very much back on the agenda, with lots of drama in store.