Armenians driven out by genocide now flee ‘home’ from Syria 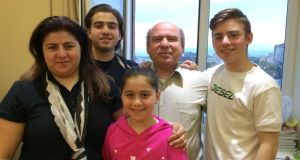 Looking across Yerevan to where Mount Ararat soars over Armenia’s border with Turkey, Samuel Agopyan’s thoughts travel on, to the ancient Syrian city where he was born 16 years ago and could have been killed last summer.

“Rockets hit the Armenian district of Aleppo every day, and there was a sniper on our street. We had to run there, not walk,” Samuel recalls of life caught between Syrian government forces and rebels the family regard as “terrorists”.

“The terrorists fire their ‘hell gun’ into our area. It’s a cannon that shoots big gas cylinders packed with shrapnel,” says his father, Arshag (60), as his mother Sevan pours cups of cardamom coffee and cinnamon tea, specialities of the Levant.

“One day last August, I was out with a friend, and suddenly there was a noise and a flash – white and red,” says Samuel, who like his brother Arthur (14) speaks fluent English, Armenian, Arabic and some French.

“We ran and I realised I was injured. I still have four pieces of a grenade in my shoulder, hand and foot. They don’t hurt now, but they itch.”

Samuel’s injuries, and the prospect of army conscription when he turns 18, prompted Arshag finally to move his family from Aleppo, which became home to his father and tens of thousands of fellow Armenians who fled the Ottoman massacres of 1915-1922.

“I owned a big metal foundry, in an area that’s now held by Isis [Islamic State], and three hectares of farmland where I grew grapes, where it’s also dangerous now. When I couldn’t get to these places anymore, I set up a small foundry in our Armenian district,” he explains.

Arshag kept working after sending Sevan, their two sons and their daughter Lucy (10) to Armenia late last year; he joined them in Yerevan this month.

“Everything you see here, I had five, six, 10 of those things in Aleppo,” Arshag says, sweeping his hand around the living room, eyes blazing with pride and anger.

“I had five houses in Aleppo. Now I have to rent an apartment here, and have no work.”

Scattered across the Middle East and around the world by what they call the genocide of their people, which claimed up to 1.5 million lives, Armenians are now being driven back to their ancestral homeland by bloodshed in Syria and Iraq.

More than half of the 80,000 or so ethnic Armenians who lived in Syria before the conflict have fled the country; many moved to Lebanon, some to western Europe and north America and about 13,000 now reside in Armenia.

For many Syrian-Armenians – and for Armenia itself – the homecoming has been difficult.

The state is providing some accommodation and loans for small businesses, and aid groups are helping Syrian-Armenians to integrate and access basic services, but the strain is considerable on a poor and corruption-plagued country.

“Everyone here wants to be a ‘businessman’ and have money without working hard for it,” says Arshag.

“I saw how Armenia’s industry was destroyed when the Soviet Union collapsed. The government should let people take charge of all the factories that are sitting idle. I could make a success of it, I just need a little help to get started.”

Hrair Aguilian is already building in Yerevan the kind of successful business he lost when he left Aleppo in December 2012.

“I have accepted that I will never go back,” he says.

“I can make money again, but what would I do if my family was hurt there? I told my wife: ‘Take whatever you can – this is a one-way ticket.’”

Aguilian (58) lived and worked in several countries, but had never set foot in Armenia until he arrived from Aleppo.

“The first day I saw Ararat, I cried,” he says, “and by the third day I knew I could do business here.”

Now Aguilian owns a furniture factory and a stake in a new 16-floor building in which all 84 apartments are already sold.

“Most Armenians in Syria lived a good life, and lost everything in five minutes. They expected more from Armenia, but this is a poor country, and we shouldn’t ask for what the government can’t give,” he says.

Across Yerevan, Samuel Agopyan walks through warm evening air to see a friend who is leaving for Germany the next day. Every weekend, he talks on Skype to Armenian friends from Aleppo who now live in Sweden, Spain, Canada, Austria and Lebanon.

“I want to back to Aleppo one day. It’s my birthplace, where all my memories are. It’s home,” he says.

“But maybe it’s impossible. I’d be happy to stay here if I could make a good life. But that’s tough in Armenia.”