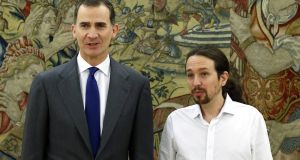 After a month of deadlock in Spain following inconclusive elections, the anti-austerity party Podemos has seized the initiative by proposing the formation of a leftist coalition government, while acting prime minister Mariano Rajoy chose not to extend his tenure due to lack of parliamentary support.

Podemos leader Pablo Iglesias announced on Friday that he would be willing to serve as deputy prime minister under the Socialist leader, Pedro Sánchez, with each party taking a designated number of ministerial portfolios.

He also included the communist-led United Left (IU), in the proposal.

The governing Popular Party (PP) lost its majority in the December 20th election, taking 123 seats. The Socialists have 90 seats, Podemos 69 and IU two.

“Faced with the irresponsibility of the traditional parties, which appear to be very comfortable making mere declarations, we have decided to take the initiative and take a step forward,” Mr Iglesias said.

“There is no room for half-measures: either you want change or you want stagnation and deadlock.”

The Podemos leader made his surprise announcement after meeting King Felipe VI, who has held individual talks with political leaders during the week.

After Mr Iglesias’s audience with the monarch, it was Mr Sánchez’s turn, with acting prime minister Mr Rajoy of the PP concluding the round of meetings in the evening.

“Pedro Sánchez’s historic opportunity to become prime minister is a piece of luck for which he’ll have to be grateful,” Mr Iglesias said.

The proposal comes as a congressional investiture debate looms to decide whether or not the king’s first choice candidate becomes prime minister.

Tradition dictates that would be Mr Rajoy but during his meeting with king, he turned down the chance to face an investiture vote.

But while he insisted that Mr Rajoy should be first to face an investiture vote, he did not rule out taking up the Podemos offer. “In politics and in democracy, we have to be very scrupulous, very careful, when it comes to the democratic procedures and time frames,” Mr Sánchez told reporters after meeting the monarch.

“It’s Mariano Rajoy’s turn and there should be no doubt in the minds of Spaniards: if Rajoy fails [to form a government] the Socialist Party will do everything possible to make sure there is a progressive, reformist government that reaches out to the left and right in order to bring about the change that Spaniards called for in the December 20th elections.”

Podemos and the Socialists, meanwhile, coincide broadly on a number of policies, such as education, the need to roll back a PP labour reform, loosening austerity and restoring lustre to the welfare state. But there are several issues that divide them, the most notable being Podemos’s promise to holding a Scotland-style independence referendum in Catalonia in a bid to defuse separatist feeling there.

Also, the nature of Mr Iglesias’s invitation to the Socialists to form a government – via a press conference rather than directly contacting Mr Sánchez – might not be the best way to begin a governing relationship.

Ciudadanos, the new party which took 40 seats in the election, attacked Friday’s proposal. Leader Albert Rivera tweeted: “Some of us prefer to talk and negotiate democratic, social and economic reforms, while the first thing others do is ask for ministerial posts.”

If congress fails to approve a candidate for prime minister, fresh elections will be triggered two months after the first investiture vote. Some observers believe Podemos is aiming for this outcome, as polls show it would improve its share of seats if elections were repeated.