Another night of shame for Italian football 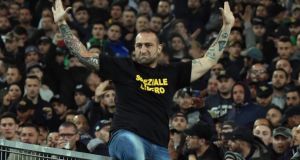 Gennaro de Tommaso, the leader of SSC Napoli ‘Curva A’ supporters, wears a shirt reading ‘Speziale Libero’ as he sits on the railing prior the Italy Cup final. Photograph: EPA

In the end, the most disconcerting image that will remain of last night’s Italian Cup final in Rome will be that of officials and police involved in a touch-line “negotiation” with a Napoli “ultra”, the well-known son of a Mafioso, seeking his “agreement” to let the match start.

Even more disconcerting, perhaps, is the fact that this “negotiation” took place not only on live TV but in front of a packed VIP stand at the Stadio Olimpico in which sat, seemingly powerless, Italian prime minister, Matteo Renzi, president of the senate, Pietro Grasso and the head of parliament’s anti-mafia commission, Rosy Bindi. Even by its own less than salubrious standards, Italian football has touched a new low.

This latest “night of shame” began on Saturday afternoon, some hours before Fiorentina were due to meet Napoli in an eagerly awaited Italian Cup Final at the Olimpico in Rome. Media reports claim that a group of Napoli fans got into a violent altercation with a well-known Roma ultra, 48-year-old Daniele De Santis, who runs a small huckster stall close to where the Napoli fan buses were parked, at Tor di Quinto, three kilometres away from the stadium.

Enraged by the Napoli fans, De Santis reportedly attacked them first with fireworks and sound bombs before he pulled out a gun, shooting six bullets and injuring three people, one of them seriously. When other Napoli fans got to hear that 30-year-old Ciro Esposito had been shot at close range in the chest (he may risk paralysis since a bullet lodged in his spinal chord), they then turned back, looking for De Santis. Having found and surrounded the Roma ultra, who appears to have been alone, the Napoli fans then beat and kicked him mercilessly, cracking his skull, breaking one leg and inflicting other serious damage.

By the time, fans arrived at the stadium last night, news of this and other less serious scuffles in and around the stadium had gone viral with many wondering if the match would be played. Worse still, given the lack of precise information, rumours began to spread that the three Napoli fans had been shot by Fiorentina fans.

With the Napoli fans seemingly on the warpath and perhaps ready to stage a pitch invasion, police and match officials called on Napoli team captain, Slovak Marek Hamsik, to join them in pitch-side negotiations with Napoli ultras to calm the atmosphere. Among other things, Hamsik told the fans that their Fiorentina counterparts had had nothing to do with the shooting incident.

The problem about these “negotiations”, however, was that one of the Napoli ultras was a certain Gennaro De Tommaso, son of a camorrista, linked to the Misso crime family in Naples. Worse still, De Tommaso was wearing a t-shirt which read “Free Speziale”, a reference to Antonio Speziale, a Catania fan sentenced to eight years prison for having killed police inspector Filippo Raciti during violent exchanges between police and fans prior to a February 2007 Catania-Palermo Sicilian Serie A derby.

Sitting arrogantly astride the stadium perimeter fence, De Tommaso and his t-shirt went all around the world on live TV. After lengthy negotiations, in front of a seemingly irrelevant prime minister, the ultras decided that the game could start. For the record, Napoli won the ensuing match 3-1.

Police and Football Federation officials today defended their handling of the situation, arguing that in the powder keg atmosphere of the Olimpico, the major priority was to ensure that the match took place. The authorities were worried about the prospect of 60,000 Napoli and Fiorentina fans have to exit the stadium at the same time. As it was, there were no serious post-match incidents because the Fiorentina fans were escorted out immediately after the final whistle whilst the Napoli fans remained in the stadium for the post-match celebrations.

This most recent incident recalls the ugly events of the Roma-Lazio derby of March 2004 when none other than Roma idol, Francesco Totti, was forced into a similarly humiliating pitch side negotiation with Roma ultras. On that occasion, a rumour, subsequently proven to be totally unfounded, had circulated amongst the fans that a child had been killed in pre-match skirmishes between police and fans. Remarkably, the Roma ultras demanded at half time that the game be suspended. To the eternal shame of Roma, Lazio and Totti, the ultra had their way and the game was indeed suspended.

Ironically, one of the Roma ultras who stood pitch side that night to “convince” Totti was a certain Daniele De Santis, the man allegedly at the centre of yesterday’s shoot-out. In ten years, Italian football has made a lot of progress.