Chancellor insists she will not allow Germany to be divided 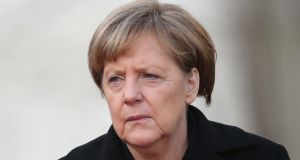 German Chancellor Angela Merkel told the Bundestag on Thursday she understood some people’s concerns over globalisation, migration and crime had attracted them to Pegida, but warned “other motives are at play” behind the scenes in the organisation, such as “prejudice . . . even hate”. Photograph: Sean Gallup/Getty Images

Chancellor Angela Merkel has stepped up her rhetoric against the Pegida group, warning Germans not to be deceived by the “pure hate” behind its Islam- critical campaign to limit immigration.

Her hard-hitting remarks come as police in Dresden, home to Pegida’s weekly marches, investigate the fatal stabbing of a 20-year-old asylum-seeker.

The German leader told the Bundestag on Thursday she understood that some people’s concerns over globalisation, migration and crime had attracted them to Pegida, but she warned that “other motives are at play” behind the scenes in the organisation, such as “prejudice . . . even hate”.

“We all have images of the other in our heads [but] for some they become bogeymen,” said Dr Merkel.

Attendance at Pegida’s Monday evening marches has grown exponentially as it campaigns for limits on immigration to halt the supposed “islamisation” of the west and the threat of Islamist violence.

A week after the Paris attacks by Islamist extremists, Dr Merkel insisted she would not allow Germany society to be divided. The Christian Democratic Union (CDU) leader said Islam was now as much part of Germany as Judaism and Christianity, but that greater dialogue was needed to counter ignorance and fears.

It was “urgent” that Imams did more to draw a clear line between Islam and Islamist extremism, she said, while Christians in Germany should “speak more and with greater confidence about their Christian values”.

On Monday evening, Pegida attracted 25,000 people to its 12th weekly march in Dresden.

Dr Merkel dismissed complaints within the CDU that her push to the political centre had seen right-wing voters drift away to Pegida and the right- wing Alternative für Deutschland. Support for her CDU remained steady in polls, she said, because “the conservative is and remains a root of the CDU”.

Meanwhile police in Dresden have opened a murder investigation after a 20-year-old asylum seeker from Eritrea was found dead outside his apartment on Tuesday. They only sealed off the scene 30 hours later after a post mortem revealed he didn’t die from a fall from his balcony, as originally thought, but from multiple stab wounds in his chest and neck.

A spokeswoman for a local charity said the attack, and the Pegida marches, had left many asylum seekers in Dresden feeling “threatened”.