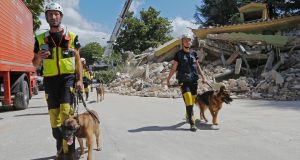 Rescue workers with sniffer dogs following an earthquake in Amatrice, Italy. The dogs have a tough time dealing with dust in their noses. Photograph: Ciro De Luca/Reuters 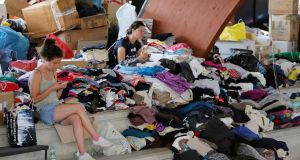 Donated clothes ready to be distributed in a gym in Amatrice, Italy, after an earthquake there. Photograph: Ciro De Luca/Reuters

On the day after Italy’s most recent deadly earthquake, which at the latest count has claimed 241 lives, Amatrice was given yet another ugly reminder of the cost of living high up in this Appenine Mountain “paradise”.

Just 100 yards away, beside the Don Minozzi Old People’s home, there are a set of temporary tents. These are no ordinary tents - they are a sort of portable mortuary.

People queue up for the horrendous task of identifying the bodies of relatives and loved ones.

Sometimes there are no relatives still living, and it falls to town mayor Sergio Perozzi to identify a body...if he can.

On a low wall just beside the mortuary, relatives sit, some in a total daze, some weeping openly, all overwhelmed by the tragedy that has hit this town of some 2,600.

Just up the road, Andrea Cardoni of the ANPAS voluntary association is making preparations for the living rather than the dead.

He and a veritable army of volunteers are busy putting up tents which, by tonight, will serve as homes for those citizens whose houses have been destroyed.

Toilets, a sewage draining system, a huge field kitchen, hot water and showers are being installed.

If the experience of the L’Aquila earthquake of 2009 is anything to go by, then the “sfollati” (homeless) could spend up to six months in these far from luxurious residences. 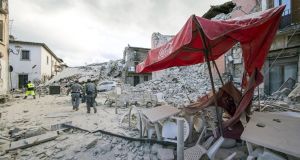 Gallery: Italy earthquake Before and after images of towns

A man called Andrea is, like many of the rescue workers here, a veteran of L’Aquila in 2009 and the more recent Emilia Romagna earthquake of 2012.

He says the only way to help people through this trauma is to try to personalise their tent. People often ask rescue teams to go into their houses and bring back a particular plant, painting or, more often, photo of a family member - anything which will help create the illusion that this is home.

Andrea points out that one of his biggest problems concerns children. Many of them are so traumatised by the quake that they simply do not want any roof, even a tented roof, over their heads. For the children, as indeed for many adults, there is a serious need for psychological counselling.

Further down the town, Paola is busy trying to sort out a veritable mountain of food and clothing supplies which have arrived via donations from all over Italy.

Paola, like many others, slept in her car last night. Her house has been destroyed by the earthquake. Worse still, the pharmacy which she and her husband ran has also been destroyed.

As she rummages among endless boxes of tinned beans, lentils, peas and other foodstuffs, she has the look of someone going through the motions, glad to have something to keep her mind off the awful quake experience and her now uncertain future.

What will she and her husband do? Will they stay here?

“Of course, where else would we go? People have to stay here, people have to get the town up and running again.”

At times, witnessing a rescue operation like this can seem like a truly surreal experience - a sort of cross between a glorious village fete and the Mad Max movies.

There is a frenetic coming and going of lorries, SUVs, land rovers, diggers and rescue workers.

The roads around Amatrice at times seemed clogged to well past the point of viability, yet the rescue work goes on - even if at this stage the likelihood of pulling anyone alive out of the rubble is very low.

Diana and Andrea, two of the many sniffer dog handlers here, say even for their dogs Mila and Ibra (named after footballer Zlatan Ibrahimovic), the noise, dust and rubble can be too much to take.

Their noses and ability to sniff out a human body dead or alive, as they have been trained to do, last for just two or three days at a time.

The dust so clogs up their sensitive noses that they then have to be pulled off the job and moved to a clean-air environment.

Although it means little to the rescue teams right now, word comes through that state attorneys in Rieti have opened investigations into alleged illegal building and related manslaughter in both the towns of Amatrice and Cumoli, two of the worst hit locations.

But that is a story for another day.