After 500,000 evictions, debtors take on the bailiffs

It does not take a lot to get evicted in Spain: anyone in mortgage arrears of three months or more can be targeted. With some 200 evictions taking place daily across the country, more people are taking matters in their own hands and fighting back. 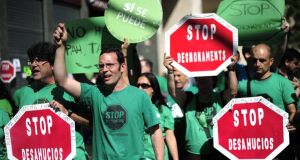 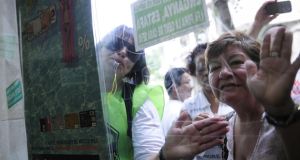 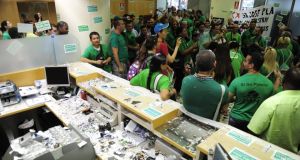 Once the word gets out, the social networks hum with the details: tomorrow at 10am; here’s the address. That’s when the army of protesters descends, some of its members travelling up to 40km for the battle. Today the front line is Avenida de les Corts Catalanes, in the Artigues area of Badalona, east of Barcelona city, where a family of six who have fallen on hard times are about to lose their home.

Here the phrase refers to the social movement’s insistence that citizens collectively take on the banks and authorities to fight for their right to housing, in accordance with the Spanish constitution and the Universal Declaration of Human Rights.

Amid the organised chaos Justa Serrano Collado cuts a lonely, fragile figure. Sobbing between shouts, the 45-year-old mother of four is overcome by the show of solidarity but also gripped by terror at the impending arrival of the bailiffs.

“We have been paying the bank all we can,” she says, wiping away tears with one hand, a green “Sí se puede” sign drooping in the other. She and her husband bought their apartment in 2000, and continued to meet the €650 monthly mortgage repayment until 2010, two years after he lost his job in a warehouse. But since his dole stopped, two years in, they have been paying €426, the amount she receives in social benefit each month. “The bank says it’s not enough.” Her husband gets a further €426 a month, all of which they need to buy food, pay bills and clothe their children.

As the protest intensifies, good news arrives: a judge has suspended the eviction on foot of a petition by the platform. The crowd erupts into applause, and there are more tears as they rush to congratulate Collado and share their own experiences, good and bad. For now Collado has been spared the indignity and hardship of homelessness. But the reprieve is merely that: Bankia, the bank in question, may come knocking again.

Every day across Spain similar battles are unfolding. With bases in about 160 towns and villages, the slick and well-organised anti-evictions platform is overseeing a revolution in which people of diverse ages and political and racial profiles are taking to the streets. There have been about 500,000 evictions across Spain since the property bubble burst in 2007, according to the platform.

In the Barcelona area alone, where the movement was founded, about 20 are being carried out each day. The figure is closer to 50 in the southern region of Andalusia. An estimated third of those evicted are children. It does not take a lot to get evicted in Spain: anyone in arrears of three months or more can be targeted.

The last-minute court decision in Collado’s favour was facilitated by a law passed in May allowing judges to suspend evictions for up to two years in some cases where unfair terms have been identified. The new legislation was Spain’s response to a ruling in March by the European Court of Justice that Spanish legislation breached EU consumer protection laws because it did not allow courts to halt evictions even where mortgage contracts contained unfair terms.

But housing activists say the law does not go far enough to protect vulnerable homeowners who were offered cheap money during the boom and whose taxes have helped bail out the financial institutions that they say played such a big role in generating the crisis. They also say there has been little change since the country’s banking association pledged last year to suspend evictions in cases of “extreme hardship”. The promise followed a spate of suicides by homeowners in financial difficulty, including that last November of Amaia Egaña, a former Basque Socialist Party councillor, who jumped from her fourth-floor balcony in Barakaldo as bailiffs climbed the stairs to evict her.

“What we want is a stop to all evictions in this time of crisis, though we prefer not to use the word ‘crisis’. We say instead that it is all as a result of a big fraud,” says Gala Pin, a 32-year-old spokeswoman for the Platform for Mortgage Victims.

The movement is also pressing for troubled homeowners to be allowed to return the keys to the bank and be released from their debt. Under Spain’s strict foreclosure laws, homeowners must still pay off their mortgages, complete with interest and fees for late payments, even after they have been evicted and their home repossessed.

“We want people to get a second opportunity, like the banks got, but this is not the case in Spain at the moment,” says Pin, who has no mortgage but got involved in the campaign after taking part in the 15-M movement which demonstrated for radical changes to Spanish politics.

Walking away from a mortgage debt would not solve the evicted homeowner’s housing problem, however. This is where, says Pin, the millions of apartments and houses lying vacant across Spain could be put to use for social housing: former homeowners would rent these apartments at prices set according to their means.

“In Spain there are more than three million homes empty, and more than a million belong to the banks. So what we want is that these banks – most of them rescued with public money – that they use these buildings to provide a social function, and they guarantee that fundamental right to housing.”

As Collado and her family begin to recover from the trauma of their narrow escape, text messages are circulating details of the next eviction stand-off. “This is what we do. This is our life now,” says Nuria Ibañez, a 58-year-old widow and mother of two who protested at Collado’s apartment. Ibañez was evicted and, with the movement’s help, she says, reached an arrangement with the bank. “We fight for others now. We will never stop.”

CIVIL ACTIVISM
An alternative to politics
As Spain’s crisis deepens, its people are turning away from politics and taking matters into their own hands. In Terrassa, a city of 215,000 people about 30km northwest of Barcelona, more than 100 people have gathered for a weekly meeting of the Platform for Mortgage Victims.

Newcomers are instructed how to prepare a dossier to begin negotiating with banks – and on keeping what little money they have out of the reach of financial institutions. “Don’t keep a cent in your account. If it’s there, they’ll take it,” is the unequivocal advice. People on welfare are advised to get to a cash machine minutes after the money drops into their account and to withdraw the lot.

Guillem Domingo, a 29-year-old spokesman for the platform, accepts that more cash transactions will boost Spain’s already flourishing black market but insists there is no alternative.

“Look,” he says, “What do they want?” he asks. “An entire society on the streets with no purchasing power, nowhere to live and no hope? A country that doesn’t give its people a second chance is a third-world country.”

The meeting is told of a civil-disobedience action planned for Terrassa’s 12 branches of Caixa Banc. “Take up the entire place in a queue, then each person should take a long time asking for information at the desk, getting change of €10 in five-cent pieces, depositing €2 in their account . . . anything to disrupt their business,” says Marta Muntanyola, a 31-year-old secondary teacher who volunteers with the platform.

The support network developed initially in Barcelona as a natural continuation of the international Occupy, or Indignados, movement and the 15M protests (so-called because nationwide demonstrations for a radical change in Spanish politics began on May 15th, 2011). It grew to its current 160 bases across Spain as the country’s double-dip recession fed the dole queues – the jobless rate is more than 26 per cent overall, and almost 57 per cent among under-25s.

The movement’s demand is threefold: stop all evictions, allow homeowners who can no longer pay their mortgages to hand back the keys and be released from debt, and use the glut of three million empty homes across Spain – a million of them owned by banks – to provide social housing at reasonable rents.

It has picketed politicians’ offices, blocked bailiffs trying to carry out evictions, and organised sit-ins in bank branches, which has on occasion led to the bank’s director agreeing to negotiate with mortgage-holders.

The main face of the movement is spokeswoman and one-time TV series actor Ada Colau.

The campaign says it has had about 730 evictions suspended by the courts and about 712 people rehoused both in individual apartments and in bank-owned apartment buildings taken over by activists.

Those helped by the movement in turn devote their efforts to supporting and advising others, and to attending anti-eviction protests. Everyone works on a voluntary basis.

“Who would have thought even five years ago, when people were still buying apartments and caught up in that world, that this is how we would be spending our evenings,” said Muntanyola after the Terrassa meeting. “People come here with a mix of fear and shame. They eventually see that, collectively, they can take action – sí se puede.”