Afghans stuck in Athens among thousands shut out from Balkans 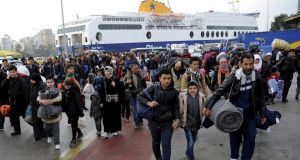 Refugees and migrants after disembarking at the port of Piraeus, near Athens: Afghans were already excluded from the relocation scheme agreed in October that aims to resettle 160,000 refugees. Photograph: Michalis Karagiannis/Reuters

Eleven years ago, he was a man of influence and power, holding the position of deputy minister for pilgrimage and religious affairs in the Afghan government. Now, Sayed Ahmad Jamal Mobarez is just one of the estimated 2,500 refugees bottlenecked in Piraeus port near Athens as a result of the imposition of border restrictions across the Balkans.

Sitting crossed-legged on a blanket on the ground and holding his smiling, eight-month-old son, the 55 year old and his large family had spent their third night in the E1 terminal building at Piraeus.

Speaking ahead of this week’s provisional EU deal with Turkey to return migrants arriving in Greece, Mobarez was already incensed that only a few dozen Syrians and Iraqis were being allowed cross the tightly guarded border into Macedonia every day.

Afghans were already excluded from the relocation scheme agreed in October that aims to resettle 160,000 Syrian, Iraqi and Eritrean refugees from Italy and Greece to other EU countries over the next two years.

“Afghans, Syrians and Iraqis are all human beings. The EU has always said it supported human rights but the recent decision about the border differentiates us. People everywhere want to protect themselves from danger. I’ve received death threats from al-Qaeda, the Taliban and Daesh, ” he says, using an alternative name for Islamic State.

Since leaving Kabul a month ago, he has spent, he says, $100,000 (€91,000) on getting himself and 14 others, including some of his children and in-laws, as far as Greece. After a flight from the western city of Herat to Iran, they then endured a 31-hour trek on foot across the mountainous border into Turkey.

“My wife, two daughters and a son went missing on the way. Iranian border police opened fire on us and thieves robbed us of any cash and mobiles they could find. We lost them in the commotion and haven’t heard from them since,” Mobarez says.

The sea crossing from Turkey to the Greek island of Chios on a crowded rubber boat was another brush with death.

“Unfortunately, after encountering all this danger, when we got to Europe, we found that the EU has shut its borders to us. Worst of all they call us economic migrants. We didn’t come here because we’d financial problems. I had no needs when it came to cars and homes. We came because we were in grave danger.”

But he insists he was innocent. “I was made a scapegoat and was eventually released from prison under pressure from civil society.”

Thereafter, he took up community work, speaking out against the dangers of extremist groups.

“I warned people that Daesh [Isis] and the Taliban are working against their religion and that they have nothing to do with Islam.

“I challenged them to a dialogue but they refused. They then threatened to kill me and my family,” says Mobarez, who is critical of the international community’s inability to root out Islamist groups in his country.

Despite the many odds stacked against Afghan refugees, Mobarez sincerely believes that, just as he has managed to get so far, he will make it to Germany, his intended destination.

“The border may be closed today, but tomorrow it may be open.”