About 20,000 refugees stranded in Greece as borders shut down 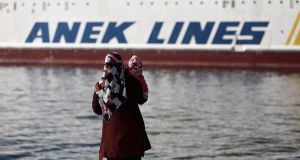 A Syrian refugee stands at the port of Piraeus after arriving in Athens on Thursday. More than 2,000 migrants and refugees arrived in the Greek capital that day. Photograph: Simela Pantzartzi/EPA

Greece has promised to open five more camps in the north of the country to accommodate some of the estimated 20,000 refugees and migrants stranded at 18 points across its territory.

This is the knock-on effect from Austria’s recent decision to restrict crossings on its southern border to a small number of Syrians and Iraqis, and to exclude Afghans refugees completely.

With the toughening of border policies throughout southeastern Europe, Greece has developed into a bottleneck as refugees already in the country attempt to make their way to the northern border, many in coaches and some on foot.

The defence ministry announced the plans to open new camps mainly in Kilkis prefecture, on the border with Macedonia, where an estimated 6,000 refugees have exhausted the capacity of the three existing centres in the region.

While Greece received 2,044 new arrivals on Wednesday, only 551 crossed into Macedonia. Next in line, Serbia allowed just one migrant to enter, while Hungary received 166. Croatia and Slovenia took none. At the end of the western Balkan route, Austria admitted 75.

Relayed by translators, the news that the borders have been effectively closed to them has been greeted with disbelief by many refugees in Greece, who have vowed to continue moving northwards.

“Why stay in the camps where it’s just as cold at night. The closer we are to the border, the easier it will be to cross,” one young man said.

Police have attempted to ease numbers on the border by halting northbound coaches containing refugees, many of which are being blockaded by farmers in protest at government pension reforms.

In many instances, passengers simply abandoned the buses and began walking the rest of the way.

Faced with the visible increase in numbers on the roads in northern Greece, communities have swung into action to provide shelter and support to the migrants.

In the city of Trikala, 3.5 hours’ drive from the border, more than 350 people, mostly Syrians and Iraqis, spent the night in a sports complex. Local citizens and businesses rallied to provide essential items, while pharmacies and hospitals offered medical assistance.

Many spent the night in ferry terminal halls, where they received food and water, clothing and medical assistance from the Red Cross and the dozens of volunteers who have maintained a presence at the port for months.

In the centre of Athens, hundreds of refugees, mainly from Afghanistan, faced another night of sleeping out on Victoria Square.

Seven weeks into the year, almost 102,000 asylum seekers have made the treacherous crossing from neighbouring Turkey, mainly in small inflatable boats, at a rate more than 20 that of the same period last year.