Ebola cases in west Africa to hit 9,000 this week, says WHO 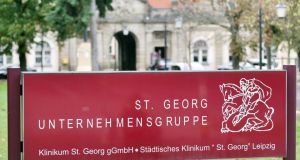 A Sudanese United Nations medical official who caught Ebola while working in Liberia has died in a hospital in Leipzig. Photograph: Jan Woitas/EPA

The Ebola epidemic is still spreading in Guinea, Sierra Leone and Liberia and the number of cases in west Africa will exceed 9,000 this week, the World Health Organisation (WHO) said yesterday.

The death toll so far in the outbreak, first reported in Guinea in March, has reached 4,447 from a total of 8,914 cases, WHO assistant director general Bruce Aylward said.

While there are signs that rates of infection are slowing in some of the worst-hit areas, Mr Aylward said the disease had now reached “more districts, counties and prefectures” than it had a month ago, and said case numbers would continue to rise.

He stressed that it would be “really, really premature” to read success into the apparent slowing numbers in some areas, noting that by the first week in December, WHO projections suggest there might be between 5,000 and 10,000 new cases a week.

“It could be higher, it could lower but it’s going to be in that ball park,” he told reporters from WHO’s Geneva headquarters. “In certain areas we’re seeing disease coming down but that doesn’t mean they’re going to go to zero,” he said.

The WHO has repeatedly said Ebola cases are underreported in the three hardest hit countries, and that understanding the scale and pace of the outbreak is crucial to stopping it.

“We adjust for the numbers reported,” Mr Aylward said. The WHO multiplied the numbers from Guinea by 1.5, from Sierra Leone by 2 and from Liberia by 2.5 to get a more accurate picture, he said.

The published data could also be misleading because the number of known deaths was less than half the number of cases, but that gave a false impression, Mr Aylward said.

The actual mortality rate was about 70 per cent, a figure that was consistent across the three worst hit countries, he said.

In the US, President Barack Obama said “the world is not doing enough” to fight the disease. Mr Obama suggested to reporters that he plans to reach out to foreign leaders to pressure them to do more.

“Everybody’s going to have to do more than they are doing right now,” said the president.

In Germany, a Sudanese United Nations medical official who caught Ebola while working in Liberia has died in a hospital in Leipzig where he was being treated.

The man, who has not been named, arrived in Leipzig last week and was the third Ebola patient to be treated in Germany. One was successfully treated and released from hospital, while another is still being treated.

“The patient sick with Ebola fever died during the night in St Georg Clinic in Leipzig,” the clinic said. “Despite intensive medical measures and maximum efforts by the medical team, the 56-year-old UN employee succumbed to the serious infectious disease.”

The volunteer medic was the second member of the UN mission, known as Unmil, to die from the virus.

“Unmil colleagues are saddened by the tragic news as they continue to serve at this very difficult time. Our thoughts now are with the family and friends of the departed,“ Unmil said.

Dr Bernhard Ruf at the Leipzig clinic said, “we took measures of the highest standard to protect personnel and the environment, so there was no danger to others. We have also safely destroyed all material contaminated with Ebola.”

Specialised equipment is expected to be delivered in coming weeks to Sierra Leone and then to Liberia and Guinea, the International Atomic Energy Agency said in a statement. The agency’s director general, Yukiya Amano, said it was a “small but effective contribution” to efforts to combat the outbreak.

The agency said a nuclear-derived diagnostic technology known as Reverse Transcriptase Polymerase Chain Reaction (RT-PCR) allowed the Ebola virus to be detected within a few hours. Other methods, it said, required growing on a cell culture for several days before a diagnosis was determined.

While health authorities in Sierra Leone and other affected countries are already using the technology, their diagnostic capability is limited, the Vienna-based agency said. – (Reuters)