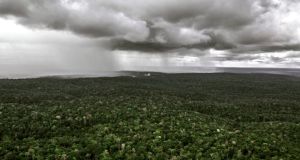 An aerial view of rain approaching in the Brazilian Amazon rainforest

The world will have to rely on “more difficult, costlier and riskier means” of meeting the target of limiting global warming at 2 degrees after 2020 unless countries move to reduce greenhouse gas emissions, according to a new report.

The Emissions Gap Report 2013, released yesterday by the UN Environment Programme (Unep), warned that the door to limiting the increase to 1.5 degrees at the end of this century “will be closed” if the gap is not bridged or “significantly narrowed”.

It estimates that global emissions in 2020 will be 8 billion to 12 billion tonnes more than the level needed to limit the rise in temperatures to 2 degrees – a target agreed by world leaders in 2010 with the aim of avoiding dangerous climate change.

‘Gap reports’
Since 2010, with the aid of 70 scientists from 17 countries, Unep has been issuing annual “gap reports” assessing the adequacy of pledges made by countries to limit the rise by 2020 against what most scientists say is necessary.

According to the UN’s Intergovernmental Panel on Climate Change, annual emissions would have to be no more than 44 billion tonnes per year by 2020 to achieve the target. However, they amounted to 50 gigatonnes (billion tonne) in 2010.

The latest Unep report – issued as delegates prepare for the opening next Monday of this year’s UN climate change conference in Warsaw – predicts the gap in 2020 would be 8 to 12 gigatonnes, only slightly less than last year’s estimate.

It notes that the relative contributions to global emissions have “changed significantly” over the past decade, with the share attributable to developed countries falling from 51.8 per cent to 40.9 per cent of the global total.

Altered balance
Over the same period, emissions from developing countries (including China) increased from 48.2 per cent to 59.1 per cent, such that they are responsible for “roughly equal shares” of cumulative emissions from 1850 to 2010.

Unep executive director Achim Steiner warned that delayed action by countries in limiting emissions would mean a “higher rate of climate change . . . and likely more near-term climate impacts” as well as the continued use of carbon-intensive infrastructure.

The Unep report cites studies showing that emissions could be cut by 14 to 20 gigatonnes per year at a cost of up to $100 per tonne if pledges made by all countries were more ambitious and were matched by concrete actions.

It said energy efficiency, renewable energy, improved agricultural practices and the phasing out of of fossil fuel subsidies would help reduce emissions.