Influencing even the flag , the Religion of Humanity is seeking funds for restoration 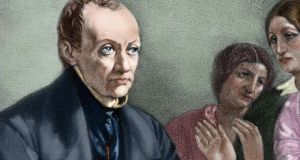 The imposing building on Benjamin Constant Road in Rio de Janeiro did nothing to mark Christmas, even though it is a church.

There was no tree or crib or festive lights under its neo-classical portico, which instead supports a banner commemorating the recent 125th anniversary of the foundation of Brazil’s republic.

The reason is that this house of worship is devoted not to Christianity but the Religion of Humanity, the obscure atheist creed developed by French philosopher Auguste Comte in the 19th century.

An offshoot of Comte’s positivist philosophy – which, like its far more influential contemporary, Marxism, looks to science to understand the workings of society – the Religion of Humanity never took off in Europe. But its followers were to play a major role in Brazilian history, with a small but influential group of positivists instrumental in ending slavery, then overthrowing the country’s monarchy and founding in its place a republic.

Today, positivism’s most visible legacy is Brazil’s flag – designed by the positivist “apostle” Raimundo Teixeira Mendes – whose motto of Ordem e Progresso (order and progress) is a condensed version of Comte’s creed: love as a principle and order as the basis; progress as the goal.

After his role in establishing the republic and designing its new flag, Mendes then turned with Benjamin Constant and other positivists to building a permanent home for observing Comte’s Religion of Humanity.

Brazil’s lower classes had long-proved fertile ground for new cults but this was a godless religion of the emerging republican elite, devoted to the scientific progress they sought for their backward country. In 1891, the world’s first positivist church was erected in the wealthy neighbourhood of Glória near the building that would soon serve as the new presidential palace.

Here every Sunday a service would take place in what at first glance looks like a sober but airy Christian church. There were even busts of Moses and St Paul inside, respected by positivists for their role in advancing moral progress, alongside other positivist heroes such as Shakespeare, Archimedes, Gutenberg and French revolutionary Danton.

That might have signalled the end for a group that had dwindled to just a few dozen adherents and that most Brazilians did not realise still existed in small pockets around the country. But the church’s leader, Danton Voltaire Pereira de Souza, was determined to turn a disaster into an opportunity, hoping a campaign to save the building could be a springboard to reconnect the church with a society it did so much to shape.

He set about raising funds and, after his death last July, his son, Alexandre, took up the project. “The goal now is to save the building for everyone to use, and by doing so recover Brazilians’ memory of positivism which was lost over the decades,” he says.

To that end, he is hoping to raise about €5 million from public and private donors for the restoration, which would not only see the church saved but include a new cultural centre, library and an archive for the thousands of books and documents relating to positivism and the early decades of Brazil’s republic that currently risk mouldering away in the building’s basement.

“We want to return this church to the Brazilian people because of the importance of what it represents for the country’s history,” says Bertrand Rigot-Muller, a cultural adviser to the church on the project.

“By reaching out to the community with education and cultural activities, this fraternal and pacifist religion can reconnect with believers.”

Though positivists played an important public role right through to the middle of the 20th century – Brazil’s most influential leader of the last century, Getúlio Vargas, was schooled in positivism – it was a movement that lost influence with the death of those like Mendes who brought the creed over from France.

But the church’s leaders believe it still has a role to play in Brazil today.

“Positivism sees three elements to progress – material, intellectual and, above all, moral progress. And moral progress is the most important and what Brazil most needs because we see everywhere today that in moral terms things are not right,” says Clóvis Augusto Nery, one of the church’s leaders.

“If we carry out the restoration, people will seek out the church. We will go back to what we were doing before. This is already a tradition of more than a century here.”

The task now is to get funding for the restoration. Brazil has a poor record of preserving its past. When the church was erected, Glória was a neighbourhood dominated by the palaces of the country’s old elite.

But in a frenzy of mid-century development, that architectural inheritance was razed to make way for the middle-class apartment blocks that predominate today.