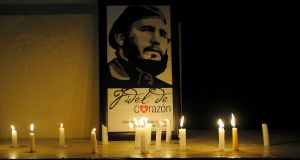 The Cuban government has declared nine days of mourning for Fidel Castro, the revolutionary leader who has died at the age of 90.

His ashes will be carried across the island from Havana to the eastern city of Santiago in a procession retracing his rebel army’s victorious sweep from the Sierra Maestra to the capital.

State radio and television were filled with non-stop tributes to Castro, playing hours of footage of his time in power and interviews with prominent Cubans affectionately remembering him.

Bars shut, baseball games and concerts were suspended and many restaurants stopped serving alcohol and planned to close early.

Official newspapers were published on Saturday with only black ink instead of the usual bright red or blue mastheads.

Castro’s death was announced on Friday night on state television by his younger brother and successor as president, Raul.

Music fell silent, weddings were cancelled and people wept in the streets the following day as Cubans faced their first day without the leader who steered their island to both greater social equality and years of economic ruin.

Across a hushed capital, dozens of Cubans said they felt genuine pain at the death of Fidel Castro, whose words and image had filled schoolbooks, airwaves and front pages since before many were born.

And in private conversations, they expressed hope that Castro’s death will allow Cuba to move faster toward a more open, prosperous future under Raul Castro.

Both brothers led bands of bearded rebels out of the eastern Sierra Maestra mountains to create a communist government 90 miles from the United States.

But since taking over from his ailing brother in 2006, the 85-year-old Raul has allowed an explosion of private enterprise and, last year, restored diplomatic relations with Washington.

“Raul wants the country to advance, to do business with the whole world, even the United States,” said Belkis Bejarano, 65, in central Havana. “Raul wants to do business, that’s it. Fidel was still holed up in the Sierra Maestra.”