Time lapse video showing the beginning to the end of the parbuckling project to right the Costa Concordia, illustrates how impressive the operation was. 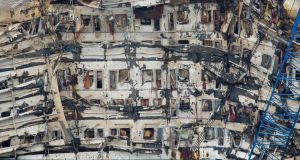 The severly damaged side of the stricken Costa Concordia is visible after the parbuckling operation succesfully uprighted the ship around 4 am today. Photograph: Marco Secchi/Getty Images

You would not want to sail in her just now and, half sunk in the island waters, she looks anything but seaworthy but there she is, the Concordia in an upright position.

One of the most ambitious salvage operations of modern times came to a triumphant conclusion at 4am when the luxury liner, Costa Concordia, which ran aground on the Tuscan island of Giglio in January last year with the loss of 32 lives, finally regained an upright position.

As the sirens sounded, it was as if the entire island was finally awaking from a nightmare.

At a four o’clock press conference, the sense of satisfaction was tangible. Franco Gabrielli, head of Italy’s Civil Protection force, the authority which co-ordinates the salvage, summed it very simply, saying:

“This is the first visible sign of a job well done. We’ve taken a decisive step towards the moment when the ship can be towed away from the island.”

Engineer Sergio Girotto was understandably equally pleased with the final outcome. For all of yesterday, Girotto had told the world’s media that all was proceeding well, indeed almost too well. However, the operation continued successfully into the night, prompting Girotto to say:

“This was something exceptional and it was a job very well done. Complimenti to Nick Sloan...”

Indeed, there was no doubting who was the hero of the hour, namely Zambian born salvage master, Capt. Nick Sloan. When he finally stepped onto the harbourside in the Porto del Giglio, he was given a rock star reception, surrounded by TV cameras and reporters and warmly applauded by those islanders who had stayed up all night to watch the completion of the “parbuckling” operation.

Capt. Sloan then made his way to “Bar Fausto” where, rather than consuming a regulation cappuccino, he opted instead for some well earned beer, chased down with the odd whiskey. Three carabinieri stood guard at the door of the little harbourside bar, fending off the media hordes.

Mr Sloan cried a tear or two when he met with the media this afternoon.

Earlier in the day, much to the delight of the Italian media he had said that few countries would have been able to pull off “an operation of these dimensions.”

At his press conference this afternoon, he confessed:

“You know I have been moved by other jobs but this really was something different...500 of us have been working on this project for months now...When the operation started, there were 12 of us in the control room but when it finished there must have been 22 of us in there...In the beginning, we were all pretty tense, I mean you are talking about moving six thousands tons of ship and that clearly was very difficult. But we got our figures right...”

Sitting outside the bar and sipping a beer earlier was Capt Rich Habib, managing director of Titan Salvage, the company which along with Italian partners formed Titan-Micoperi, the international salvage team which has “righted” the Concordia. Asked by The Irish Times to assess the job just done, Capt Habib was understandably enthusiastic, saying:

“This was a perfect job, it don’t get better than this...and sure, this will be part of shipping history because this was one of the most difficult salvage jobs of recent times...”

As for the Concordia, the salvage process is far from finished. She might have been successfully “parbuckled” but when she did emerge from the waters, she did so with a badly damaged side with a whole section of the ship bent in on itself as if it had been hit by a mammoth container truck.

This means that before she can be towed away to Piombino for scappage, she will first have to be repaired and made at least temporarily sea-worthy. Furthermore, the Concordia has been raised but not refloated since she is currently sitting on a purpose made underwater steel platform and it will clearly require months and a deal of complex work to get her back up to the sea surface.

For the judicial authorities, however, the first priority, just as soon as the Concordia is deemed “safe”, will be to search for the missing bodies of two of the 32 victims of the shipwreck.

Once that search has been completed, then preparations begin in order to tow away the ship. That is for the future. For the time being, the Concordia has been raised and a difficult job has been well done.