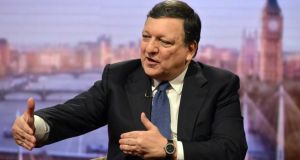 European Commission president José Manuel Barroso infuriated Scottish nationalists when he told the BBC’s Andrew Marr that Scotland would have to renegotiate EU membership in the event of a vote for independence. Photograph: PA

The tricky issue of secessionism reared its head in Brussels this week as the debate about Scottish independence intensified.

European Commission president José Manuel Barroso weighed in to the debate in a weekend interview with the BBC, infuriating Scottish nationalists by asserting Scotland would have to renegotiate EU membership in the event of a vote for independence.

In reality, Barroso’s comments were nothing new. The head of the European Commission had submitted similar information to a House of Lords select committee in December 2012 as part of an inquiry into the consequences of a Scottish exit. “A new independent state would, by the fact of its independence, become a third country with respect to the EU and the treaties would no longer apply on its territory,” he wrote.

While the debate intensified in the last few weeks, the British government has been in contact with officials in Brussels on the issue.

Last month, Britain’s secretary of state for Scotland Alistair Carmichael addressed the Centre for European Policy Studies in Brussels during a visit. The Liberal Democrat MP – a Scot who represents the Orkney and Shetland constituency in Westminster – didn’t pull any punches.

Scotland’s claim for independence was nothing more than a “vanity project” for Scottish National Party leader Alex Salmond, and a reflection of “one man’s obsession”.

That the British government is using the attraction of EU membership as a key tool in its argument against Scottish secession is a supreme irony, given David Cameron’s plans for a referendum on the EU.

Ironically, the almost seamless streamlining of the legal view from Brussels and Westminster on Scotland’s claims on EU membership could be a fatal blow for the independence vote come September. From the EU’s perspective, Barroso’s comments have sent legal experts scrambling over the minutiae of EU law.

The Scottish conundrum touches legal issues within the EU treaties. The SNP argues it can reapply for membership under article 48, which allows any member to submit a proposal to the Council of the European Union to amend the treaties. The European Commission and British government contend Scotland must reapply through article 49, the framework for a country seeking accession.


UK status
This has been dismissed by supporters of Scottish independence, who have countered that Scotland is already an EU member. The argument is that if Scotland must reapply for EU membership, then so too should the UK, which would itself become a different political entity should Scotland secede. There are no clear provisions for member state break-up.

Scottish nationalists point out the EU has dealt swiftly with other complex issues relating to national sovereignty, for example the assimilation of East Germany into the West after reunification. They argue if the political will exists among member states to back Scottish membership – either under articles 48 or 49 – then it will be enacted swiftly.

The question of whether member states will back Scotland’s quest to remain in the EU is a key factor. According to Barroso, unanimous support cannot be guaranteed. Of particular concern is the impact on Catalonia.

While opinion polls in the wealthy northern region of Spain have shown strong support for secession, the Spanish government has outlawed a planned referendum. And while the Spanish prime minister has publicly said the government has no comment to make on Scottish independence, privately EU officials say Spain is likely to have serious reservations about allowing a newly independent Scotland an easy path to EU membership, for fear of setting a dangerous precedent for Catalonia.

Spain, along with a handful of EU countries including Cyprus – itself a divided territory – has refused to recognise Kosovo as an independent country, complicating any attempt by the former Serb province to seek EU membership. Kosovo is a different case to Scotland – many countries, not just Spain, refuse to recognise its sovereignty. Nonetheless, the threat the Scottish issue may stoke the flames of separatism elsewhere means the issue of Scotland’s EU membership is likely to be a contentious one.

Listen to Mark Hennessy and Paul Gillespie on what Scotland’s referendum means for Ireland on World View with Denis Staunton irishtimes.com/news/world
/world-view