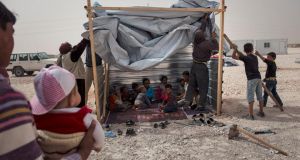 Syrian refugees build a makeshift tent while waiting for a trailer from the United Nations High Commissioner for Refugees, at the Zaatari refugee camp in Jordan. Photograph: Lynsey Addario/The New York Times


The international community’s failure to address conflicts such as that devastating Syria is creating a “global underclass” of refugees, Amnesty International said yesterday as it launched its annual review of the state of the world’s human rights.

Amnesty’s global annual report is a country-by-country survey of the human rights record of 159 individual countries and territories, including Ireland, in 2012.

This year’s report takes as its theme the challenges faced by refugees, internally displaced people and migrants. Last year the world witnessed several major emergencies – including fighting in Syria, Mali, Sudan and the Democratic Republic of Congo – that forced large numbers of people to seek sanctuary elsewhere.


Failing millions
Amnesty accuses the international community of failing millions of people forced to flee their homes due to conflict, particularly in Syria, where president Bashar al-Assad’s attempts to quash an uprising against his regime has led to the deaths of more than 80,000 people.

According to the UN refugee agency UNHCR, more than four million people have been internally displaced by the fighting in Syria and more than 1.5 million have fled to neighbouring countries where many are forced to live in makeshift camps.

“The failure to effectively address conflict situations like Syria is creating a global underclass of refugees,” said Colm O’Gorman, executive director of Amnesty International Ireland. “The rights of those fleeing conflict are unprotected.”

Amnesty is calling for a concerted effort by international donors to address the crisis.

“Turkey, Lebanon, Jordan and Iraq cannot support hundreds of thousands of desperate people by themselves. They need help to assist the refugees,” Mr O’Gorman said.


Irish aid
Ireland has contributed €8.15 million to humanitarian agencies dealing with the fallout from Syria’s conflict.

“We should be very proud that, despite the economic crisis, Ireland is one of the biggest per capita aid donors and we’d encourage other countries to follow that lead,” Mr O’Gorman said.

Amnesty also criticised the UN Security Council for failing to stem the violence in Syria, accusing it of standing by while forces loyal to Assad carry out indiscriminate and targeted attacks on civilians, and alleged regime opponents are detained, disappeared, tortured and executed.

It noted that on a smaller scale, armed opposition factions are taking hostages and carrying out torture and summary killings.