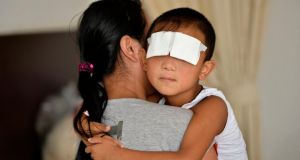 The six-year-old boy, whose eyes were gouged out, is held by his mother at a hospital in Taiyuan, Shanxi province today. Photograph: Reuters

Chinese police suspect a six-year-old boy’s aunt of gouging out his eyes, Xinhua state news agency said today, the latest twist in the investigation of a crime that shocked the country.

DNA tests found the boy’s blood on the aunt’s clothes, Xinhua reported, citing a statement from police in Linfen in rural Shanxi province.

The aunt, Zhang Huiying, killed herself six days after the attack by jumping into a well, the agency said.

The boy was lured by a woman with yellow-dyed hair into a field while he was playing outside. She gouged out his eyes and left him in a pool of blood, Xinhua reported.

But police later reported that the corneas were not missing.

Photographs and videos of the boy have circulated widely online since the attack, the most searched term on China’s Twitter-like Sina Weibo microblog service today, with internet users trying to understand what many saw as an incomprehensible act of violence.

“Now it turns out the person who destroyed this child’s whole life may be a close relative,” wrote one user. “It’s hard not to feel helpless and bitterly disappointed... how painful.”

State media has previously reported on organised gangs that abduct and maim children from the countryside so they can work as beggars, but there was no evidence that that was the motive in this attack.