‘Today is a day of relief. But tainted by some sadness’: EU and British leaders react to Brexit deal

Nicola Sturgeon says deal showed it was time for Scotland to ‘chart own future as independent, European nation’ 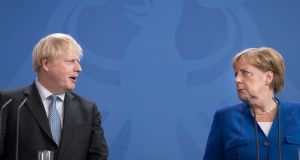 Photograph: Angela Merkel said she expects Germany will be able to decide quickly whether to back the deal. File photograph: Stefan Rousseau/PA Wire

Britain clinched a Brexit trade deal with the European Union on Thursday, just seven days before it exits one of the world’s biggest trading blocs in its most significant global shift since the loss of empire.

Below are some of the reactions from British and European figures.

British prime minister Boris Johnson: “We have . . . today resolved a question which has bedevilled our politics for decades and it is up to us, all together, as a newly and truly independent nation to realise the immensity of this moment and to make the most of it.”

Directly to the EU, he said: “We will be your friend, your ally, your supporter and indeed, never let it be forgotten, your number one market.”

German chancellor Angela Merkel said she expects Germany will be able to decide quickly whether to back the deal. “The federal government will now closely examine the text of the agreement. But we are not starting at zero. The Commission has kept the member states in the loop during the entire negotiation process,” she said.

French president Emmanuel Macron: “The unity and strength of Europe paid off. The agreement with the United Kingdom is essential to protect our citizens, our fishermen, our producers. We will make sure that this is the case.”

Taoiseach Micheál Martin said that while he respected the UK’s decision to leave the EU, he “very much” regretted the decision but wished the UK well “in this new chapter in its history.”
“Our people, our histories and our economies are deeply entwined. As we move into the next phase of our relationship, we will work together to ensure that it remains deep and strong,” said the Taoiseach.

Minister for Foreign Affairs Simon Coveney, to Newstalk Radio: “Today we finally get certainty that there is a trade deal that I think protects Ireland in the circumstances as well as we could possibly have hoped.”

Spanish prime minister Pedro Sanchez: “I welcome the principle of agreement between the EU and the UK ... Spain and the UK continue their dialogue to reach an agreement on Gibraltar.”

Belgian prime minister Alexander De Croo: “In the end, there is only one thing that matters to me: ensuring the best possible protection for Belgium’s economic interests. We must protect our Belgian companies from unfair British competition.”

Dutch foreign minister Stef Blok said the Netherlands would “carefully study the draft texts”, especially agreements on a level playing field between the EU and the UK, the access of Dutch fishers to British waters and the governance of the agreement. “There is very little time to do this.”

European Union Brexit negotiator Michel Barnier: “The clock is no longer ticking,” Barnier told a news conference. “Today is a day of relief. But tainted by some sadness, as we compare what came before with what lies ahead.”

European Commission president Ursula von der Leyen: “It was a long and winding road. But we have got a good deal to show for it. It is fair, it is a balanced deal, and it is the right and responsible thing to do for both sides,” she told a news conference.

Scottish First Minister Nicola Sturgeon has said the new Brexit deal showed it was time for Scotland to “chart our own future as an independent, European nation”. “Scotland did not vote for any of this and our position is clearer than ever. “Scotland now has the right to choose its own future as an independent country and once more regain the benefits of EU membership.” She continued: “It beggars belief that in the midst of a pandemic and economic recession Scotland has been forced out of the EU Single Market and Customs Union with all the damage to jobs that will bring.”

Former British prime minister Theresa May: “Very welcome news that the UK & EU have reached agreement on the terms of a deal - one that provides confidence to business and helps keep trade flowing. Looking forward to seeing the detail in the coming days.”

Former British prime minister David Cameron:“It’s good to end a difficult year with some positive news. Trade deal is very welcome - and a vital step in building a new relationship with the EU as friends, neighbours and partners. Many congratulations to the UK negotiating team.”

Helen Dickinson, chief executive of the British Retail Consortium: “This protects consumers on both sides of the Channel from billions in import tariffs on everyday goods. Given that four-fifths of UK food imports come from the EU, today?s announcement should afford households around the UK a collective sigh of relief.”

Richard Burge, chief executive of London Chamber of Commerce and Industry: “Businesses are aware this may not be the all-encompassing deal that was promised at the beginning of this venture. It’s important that both sides continue to be open minded to a need for future discussions, to ensure the best possible trade and access to goods and services in the years to come. Ensuring London remains a leading world city will require the best possible terms of trade.”

Airbus welcomed the news and said in a statement it was pleased the potential disruption from a no-deal scenario had been avoided.