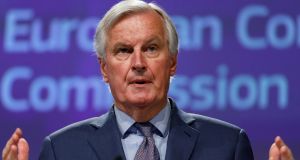 Brexit negotiator Michel Barnier: “We are negotiating on behalf of the entire EU. There must be a proper balance of rights and obligations.” Photograph: Olivier Matthys

Tensions have risen as British and European Union negotiators meet over video conference, with less than two weeks of talks remaining before London is due to declare whether it still intends to try to reach a deal.

This week sees the penultimate round of talks before June, when London has said it will decide whether to abandon talks and instead prepare to switch to default trade rules in January, something Germany’s main business lobby has predicted would be an economic disaster.

“The coronavirus crisis has already cost very many jobs across Europe,” warned Joachim Lang, managing director of Germany’s BDI industry federation. “If the Brexit transition phase expires without an agreement at the end of the year, it would turn an already difficult economic situation into a catastrophe.”

Major areas of contention divide the two sides over what Britain’s relationship with the EU should look like after December 31st. In the coming days, dozens of negotiators will try to work through these in video calls dedicated to deeply complex issues such as fisheries, trade in goods and services, energy and security cooperation.

“We need tangible progress across all areas,” said the EU’s chief negotiator Michel Barnier after the opening session concluded on Monday. “We are negotiating on behalf of the entire EU. There must be a proper balance of rights and obligations.”

Both sides say little progress has been made on key issues since the first round of talks in March, before negotiations were knocked off course by the coronavirus pandemic.

“Time is just too short,” said one EU official. “It’s very important that we make progress across all issues.”

EU officials were disappointed with progress in the last round, and expressed frustration that Britain had yet to even present a position paper in some areas, while insisting that agreement had to be concluded in just a few rounds of week-long talks.

The British government has repeatedly insisted it will not ask for an extension to roll over the current arrangements to buy negotiators more time.

“Covid-19 has made what is already a very, very difficult timeline to get agreement virtually impossible,” Tánaiste Simon Coveney said ahead of the talks this week.

Brussels insists that British companies cannot be granted unfettered access to the single market without guarantees that they will not gain an unfair advantage by undercutting EU counterparts, for example through lower environmental, labour and safety regulations, or through assistance from the state.

The British side has bridled at the idea of continuing to accept any kind of EU standards or oversight, and accuses Brussels of failing to respect UK sovereignty. It rejects the idea that the European Court of Justice could have any role in resolving disputes, while Brussels insists the court will always have the final say over any aspect of EU law.

One major point of contention is fish: the EU wants to continue trade-offs that allow boats from its member states to fish in UK waters in exchange for market access. London has so far ruled this out, not budging from a position that it will “take back control of our waters, as is our right as an independent coastal state”.

“We will approach this round of negotiations constructively, but our position hasn’t changed – we won’t agree to any demand for us to give up our rights as an independent state,” a British official said.

“We remain committed to reaching a deal with an FTA [free trade agreement] at its core and we hope to find a balanced solution which reflects the political realities on both sides.”

The EU is monitoring whether Britain enacts agreements already made last year, such as to impose checks between Britain and Northern Ireland in order to avoid a hardened border across the island.

Talks continue until Friday, with negotiators due to reconvene for one final round of talks on June 1st.