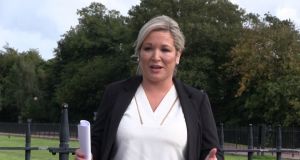 The leaders of the North’s pro-Remain parties have written to UK prime minister Boris Johnson and the EU’s chief negotiator Michel Barnier insisting that the British government must honour its commitment to the Northern Ireland Protocol.

They were responding to a report in the Financial Times that the UK government is considering using sections of a bill - due to be published on Wednesday - to override parts of the Brexit Withdrawal Agreement in the areas of state aid and Northern Ireland customs. It was debated in the North’s Assembly on Monday.

In the letter, the party leaders wrote that it was unacceptable to the Northern Ireland parties that the UK Government “would seek to abandon these safeguards and mitigations, which we believe would amount to a serious betrayal of an existing International Treaty.”

It was signed by Sinn Féin’s Northern leader Michelle O’Neill; the SDLP leader, Colum Eastwood; the Alliance Party leader Naomi Long; and the leader of the Green Party in the North, Clare Bailey.

They called on the UK government to “ensure the rigorous implementation of the Protocol, prioritise peace and stability in Northern Ireland, and work to secure a future economic partnership with their EU colleagues now and in the weeks ahead.”

Failure to do so, they warned, would have a “devastating” and “long-lasting” economic and political impact on the entire British Isles.

It would also represent “a shocking act of bad faith that would critically undermine the Good Friday [Belfast] Agreement political framework and peace process and the UK’s ability to secure other crucial deals to protect the Northern Ireland economy.”

Summing up the reaction from pro-Remain parties, one senior source described the situation as “potentially very dangerous territory” in the context of the EU-UK trade negotiations, but stressed the need for calm heads. “We have been here before.”

There was a cautious welcome from unionists - who oppose the Withdrawal Agreement because it places a customs border in the Irish Sea - though with caveats around the lack of detail and the fidelity of the UK government.

“If there are attempts to deal with some aspects of the Northern Ireland Protocol then that’s a gain for unionists,” the DUP’s Brexit spokesman, Sammy Wilson MP, said, adding that this change of stance was “also partly a result of the lobbying we have done to highlight the problems which this is going to cause politically [and] economically for Northern Ireland.”

However, he also expressed reservations, saying “the worst scenario is that this is simply a cynical ploy by the government to cover-up for a sell-out which they’re going to engage in similar to last year.”

In a statement issued on Monday night, the DUP said the UK government “must urgently address” the uncertainty around Northern Ireland’s future trading relationship with Great Britain.

The party said it noted the speculation regarding the bill, and said it wanted to “see the finer details and clauses relating to this and will study them carefully.

“We welcome them in broad terms in so far as they go, but the Government must continue to work to remove any disadvantages to Northern Ireland brought about by its signing up to the Protocol,” the party said.

The Ulster Unionist Party leader, Steve Aiken, said on Twitter he would wait for the detail but “any moves on removing impact of Irish Sea Border will be very welcome in NI, for business and consumers.”