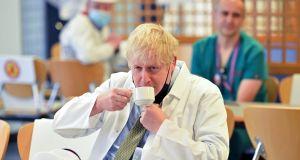 Boris Johnson pulls down his face covering to take a drink as he sits with hospital workers during his visit to Royal Berkshire NHS Hospital in Reading on Monday. Photograph: Jeremy Selwyn/AFT/Getty Images

British prime minister’s Boris Johnson’s plan to flout international law over Brexit is set to be blocked by the House of Lords next month, throwing up an incendiary early test of relations with Joe Biden if he wins next week’s US election.

Mr Biden has warned that Mr Johnson’s UK internal market Bill would undermine the Northern Ireland peace process and that he would never sign a trade deal with the UK unless key clauses in the Bill were removed.

Members of parliament’s upper house are expected to oblige Mr Biden by voting overwhelmingly to throw out six clauses from the Bill, which ministers have admitted will breach Britain’s withdrawal treaty, signed last year with the EU.

The November 9th vote in the House of Lords will come less than a week after the US presidential election on November 3rd and in the midst of what are likely to be the final stages of EU negotiations with the UK on a new trade deal.

Mr Johnson will then be faced with the dilemma of whether to commit his government to reinstating the controversial clauses in the House of Commons, risking a row with Mr Biden – if he wins the election – and with Brussels. The European Commission has already started legal proceedings against the UK for breaching “good faith” provisions in the treaty.

There is little doubt that Mr Johnson will be defeated in the upper house, where Conservative peers led by former Tory leader Michael Howard joined forces with opposition and crossbench members earlier this month to condemn the legislation.

Peers voted by 395 to 169 on October 20th for a motion regretting that the internal market Bill would “undermine the rule of law and damage the reputation of the United Kingdom”.

Mr Johnson introduced the clauses to the internal market Bill because he claimed the EU was planning to interpret the Brexit withdrawal treaty – and the linked Northern Ireland protocol – in an “extreme” way, creating a hard border between the region and the rest of the UK.

The proposed legislation would seek to limit the EU’s powers to determine state aid for Northern Ireland companies and customs arrangements in the region.

But Mr Biden said last month that the Bill would undermine the deal between the EU and UK to maintain an open border on the island of Ireland. “We can’t allow the Good Friday Agreement that brought peace to Northern Ireland to become a casualty of Brexit,” he tweeted.

The House of Lords vote had been expected to take place later in November, but peers wanted to remove the six clauses from the Bill at the earliest opportunity - at the Bill’s committee stage.

Labour’s leader in the Lords, Angela Smith, said: “I would urge Downing Street to seek to resolve the issue. The wise approach would to be for them to remove the offending clauses, so peers can focus on scrutinising and improving the rest of the Bill.”

The Lords vote could take place in the final stages of negotiations on a post-Brexit trade deal with the UK. Talks will wrap up in London on Wednesday before moving on to Brussels on Thursday.

Both sides are now working towards a mid-November deadline for a deal, a timeframe that would still leave the European Parliament enough time to ratify the accord.

The EU parliament has scheduled its vote for during its last session of the year, in the week of December 14th – only two weeks before Britain’s post-Brexit transition ends.

EU officials said that much of the talks this week in London had been taken up with the technical challenge of hammering out a common text in areas where there is already considerable agreement, including many of the conditions for trade in goods and services, with a mixture of EU and UK drafts being used as base texts that are then being amended.

A European Commission spokesperson said on Tuesday that “both sides are engaging intensively to reach a deal”, but one person briefed on the talks said that no breakthroughs had yet been made in unblocking the core sticking points of fisheries, “level playing field” conditions for business and governance arrangements for the agreement. – Copyright The Financial Times Limited 2020