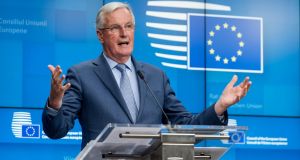 EU chief negotiator Michel Barnier warned Britain the bloc was ready to play hardball in coming Brexit negotiations as member states signed off on a common negotiating stance on Tuesday.

“We will not conclude an agreement at any price,” Mr Barnier warned in an animated press conference in which he expressed exasperation with indications from the British government that it could renege on prior accords.

“The trade agreement will be associated with a fisheries agreement, and an agreement about a level playing field, or there won’t be any agreement at all,” he said.

The EU says it is prepared to begin talks as soon as Monday, after representatives of the 27 member states formally adopted a joint negotiating position. The document says Britain can only be granted privileged trade access to the EU if it aligns with standards and rules to prevent it undercutting the Single Market: the so-called level playing field arrangements that London has vowed to reject.

If no deal is reached, onerous tariffs and customs requirements will automatically come into force between Britain and Ireland – and the rest of the EU – at the end of 2020, unless an extension of the UK’s transition period can be agreed by July.

EU states hardened their positions amid British media reports that Boris Johnson’s government had ordered its Brexit team to identify how to evade implementing checks and controls between Britain and Northern Ireland – a key part of last year’s exit deal.

Mr Barnier, a former French minister and EU commissioner, noted that the Irish protocol had been signed into law and passed by the House of Commons “following negotiation over each word and line with the British government and with the prime minister Boris Johnson himself”.

At one point during the press conference, Mr Barnier thumped his podium as he declared: “All those words are in there, they were agreed by the British.”

The EU’s negotiating mandate makes achievement of a deal conditional on the implementation of prior agreements, and pledges protection of the Belfast Agreement. It states that any accord must “ensure that issues arising from Ireland’s unique geographic situation are addressed”.

Under the Irish protocol agreed as part of Britain’s 2019 Brexit withdrawal agreement, Northern Ireland is to remain in line with the EU rules required to avoid a hard border across the island. This entails that checks must take place between Northern Ireland and Britain, the extent of which depend on the future relationship deal and how much Britain diverges from EU norms when it exits its transition period at the end of this year.

A joint committee is now being established to monitor whether there is sufficient development of the infrastructure required to enforce the edge of the world’s largest economic area along the Irish Sea, with progress expected within months.

EU observers were alarmed when Northern Ireland secretarty Brandon Lewis used his first official trip to Belfast to announce there would be no such border.

“There are reasons for us to be vigilant, because the British minister in charge of Northern Ireland has come up with some very surprising statements,” Mr Barnier said on Tuesday.

“I’d like him to take some time to read through the withdrawal agreement in detail and he will see what commitments have been entered into.”

Earlier, Tánaiste Minister for Foreign Affairs Simon Coveney told reporters that Britain’s prospects of securing “even a bare bones trade agreement” would be seriously damaged unless it made significant preparations to implement an Irish Sea border.

“If there isn’t progress on the infrastructure needed to implement the Irish protocol as part of the withdrawal agreement in the next few months then I think that is going to be a very worrying signal for whether or not it’s going to be possible to conclude something sensible for the end of the year,” Mr Coveney said.