Brexit: Taoiseach believes deal can be agreed and is set to meet Johnson 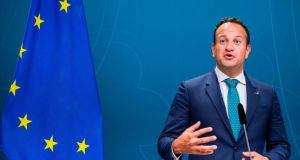 Taoiseach Leo Varadkar: ‘We are in the process of trying to arrange a meeting with prime minister Johnson next week. Time is tight.’ Photograph: Jonathan Nackstrand/AFP via Getty

Taoiseach Leo Varadkar is expected to meet with the British prime minister Boris Johnson next week as he said he believes a Brexit deal can still be struck.

The UK government has tabled proposals which would see Northern Ireland leave the customs union but Mr Varadkar had said the Irish Government can not countenance any deal that might involve checks around the Border.

“We are in the process of trying to arrange a meeting with prime minister Johnson next week. Time is tight. We have a European summit on the 17th of October and it’s not reasonable to expect 27 or 28 heads of Government to sign off on something that they only see the night before or a few days before,” Mr Varadkar said on Saturday evening.

“There are a lot of countries, for example, including our own where there’s a degree of parliamentary scrutiny. So timelines are tight.”

Mr Varadkar said there was still time for the UK government to come forward with further solutions to break the current impasse, and signalled that this coming Friday would be an appropriate deadline.

“I think Friday is reasonable. But these [timelines] aren’t going to be absolutely rigid.

“It is always possible to find an extra 24 hours or an extra 48 hours but it’s not the case that you can negotiate an international treaty at a council meeting in Brussels. ”

Just spoke to @BorisJohnson on the phone. Important questions remain about the British proposals. There is a lot of work to be done ahead of #EUCO on October 17/18.

He said it was the job of the task force to set a deadline but that waiting until the European summit to discuss any new proposals would be “pretty tight”.

The European Union dealt a heavy blow to Mr Johnson’s new Brexit proposals on Friday, and anticipated weekend talks between the two sides were called off.

The European Commission said EU member states had agreed the proposals “do not provide a basis for concluding an agreement”.

A spokesman said discussions between the two sides would not take place this weekend and instead the UK would be given “another opportunity to present its proposals in detail” on Monday.

Dutch prime minister Mark Rutte said he had spoken to Mr Johnson on Saturday, but that “important questions remain about the British proposals”.

With less than a month until the UK’s scheduled exit, Mr Johnson is seeking significant changes to how the most contentious issue – the border between Northern Ireland and the Republic – was dealt with in the divorce deal agreed by his predecessor, Theresa May, almost a year ago.

The prime minister of Finland, which holds the rotating EU presidency, said he told Mr Johnson in a telephone call on Saturday that it was important to find a solution within a week, in time for the summit.

“Johnson stated that he agreed with the timetable and understood that the conditions I presented regarding upholding the Good Friday Agreement, maintaining the unity of the EU and ensuring a functional internal market are a prerequisite for a solution,” prime minister Antti Rinne said in a statement.

A spokeswoman for Mr Johnson declined to comment on discussions with other EU leaders. – Additional reporting Reuters/PA